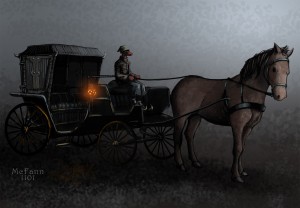 Anyone trying to navigate the busy streets and cluttered alleys of Zobeck knows the difficulty of getting anywhere in a hurry. Wherever a difficulty exists, especially in this city, someone will come along to ease the inconvenience for a price. Enter Blackeye, business-kobold, fixer, gossip, and patriot. With his specially-modified hay wagon and mighty (docile) draft horse, he’s prepared to take anyone anywhere in the Free City for a few coppers and good conversation.

Born and raised in the city’s kobold ghetto, Blackeye has spent his life learning Zobeck’s twists and turns as his forefathers once learned to navigate below ground. He rapidly came to love the rich and varied life of his home, and he took great pride in pointing out places of interest to visitors and natives alike. Seeing the difficulty so many people had getting around, Blackeye decided to fill the need for transport and indulge his love of Zobeck at the same time. No one else in the city operates a business like Blackeye’s, for what to everyone except him are obvious reasons, but he somehow makes it all work.

Most people don’t know what to make of Blackeye, and most of the rest can’t quite bring themselves to trust the old carriage he’s altered with better suspension, padded seats, lanterns, and a canopy. Still, those who take the chance always get where they need to go without trudging through the mud (and worse) of the streets and the jostling crowds. And if the cart must sometimes slow through an area where street merchants can approach and sell the passengers fine wares, well, that’s just the nature of the city. And if some of those merchants sometimes slip a few coins to Blackeye, well, that’s just the nature of the city, too.

In his heart, Blackeye’s a good soul who loves his city, loves showing it off, and just wants to make a few coins while doing so. He’s developed a good sense for his customers, and when he gets ignorant or oblivious types, he’ll take roundabout routes past merchants willing to kickback a silver for the chance to make a sale. PCs with a map or some familiarity with Zobeck may make a DC 25 Survival or Knowledge (local or Zobeck) check to notice that they’re being taken for a ride. A DC 20 Perception check lets them notice the merchants passing Blackeye some clink during a stop.

Blackeye as a Regular Coachman
Blackeye can become a useful contact or ally. The kobold will happily regale passengers with stories from the city (often whether they want to hear them or not). Blackeye will pass out common information and recent gossip with virtually no prompting. A DC 15 Diplomacy check to steer the conversation, or simply asking a straight question with a little extra cash going into the tip jar, can get him to reveal more obscure details, rumors, and theories. He rarely knows a great deal about any one thing, but he always knows a little bit about most things.

The kobold gladly points a group toward gambling, prostitution, pit fighting, and other less savory forms of entertainment, and he just as quickly takes them to the higher-brow establishments and cultural centers. A DC 25 Diplomacy, Bluff, or Intimidate check, along with a significant (10-25 gp) tip can convince him to take the party to any of several entrances he knows to the Cartways. At DC 30 and an additional 10 gp, he will show them a “private” entrance to the kobold ghetto.

Blackeye can be hired by the day for 5 gp. In addition, Blackeye has a myriad of kobold “nephews” and “cousins” who can carry messages, purchase items, and generally work for the party in one way or another. They are trustworthy, but only up to a point, especially where money is concerned.

Blackeye and His Silent Protection
As a habit (learned the hard way), Blackeye does not give out personal information about his customers; their conversation is fair game, but their address and destinations are not. This has saved both his skin and his reputation on multiple occasions, and he knows it. When asked to wait for a passenger, or to not repeat what he hears, Blackeye smiles, spreads his hands, and says philosophically that his mouth often runs away on its own if he can’t afford to put some food in it. For a gold piece, Blackeye waits and keeps his silence.

Oddly enough, if he works for the adventurers long enough, Blackeye will come to consider them “his” and will take great offense at blatant attempts to cheat the group. He will make his displeasure known in a stream of profanity-laced kobold, using his taunt ability to cow foes. As Blackeye has connections to a surprising variety of people across the city, including the Redcloaks, most street thugs give him respect.

If things get serious, Blackeye keeps a masterwork dagger at his belt and a heavy crossbow under his seat, along side a flask of alchemist’s fire. Blackeye will not die for a fare, and he can get his team to produce a surprising turn of speed when the going gets tough.

Blackeye can act as an introduction to, or bridge between, many of the adventures in Streets of Zobeck. He can certainly point a party toward a person looking for a group of adventurers, or simply take the group to the Silk Scabbard and let nature take its course.

SPECIAL ABILITIES
Darkvision (60 feet) You can see in the dark (black and white vision only).
Evasion (Ex) If you succeed at a Reflex save for half damage, you take none instead.
Honeyed Words (2/day) (Ex) 1/day add +10 to a bluff check.
Light Sensitivity (Ex) Dazzled as long as he remains in bright light.
Sneak Attack +1d6 +1d6 damage if you flank your target or your target is flat-footed.
Taunt Blackeye can demoralize opponents using Bluff rather than Intimidate (see the Intimidate skill description for details) and takes no skill check penalty for being smaller than his target.
Trapfinding +1 +1 to find or disable traps.

Got a favorite native guide for Zobeck, Sigil, Waterdeep, or another city? Tell us about it!