Skip to content
Home / Delve into the Depths in the Kobold Blog / Real Steel: The Bearded Axe 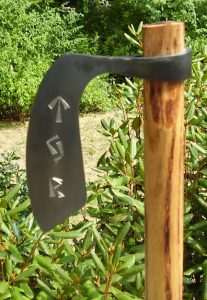 Among warrior cultures, the Norsemen created one of the richest selections of battle-tested and war-dedicated weaponry ever seen in a single culture. Spears, bows, seax, langseax, long swords, broadswords, short swords, and of course, axes. While an axe can be a tool, the Vikings clearly distinguished between axes used as common tools and those used for war. And among the Danish axe, great axe, throwing axes, and Mammen axe, the bearded axe stands out as being uniquely Norse.

Made from steel and ranging in size from 1–6 lb. with hardwood hafts from 1–6 ft., the distinguishing characteristic of the weapon is the “beard” itself. The beard is simply a portion of the blade that extends down from the main blade, resulting in both a longer cutting surface and a “hook.”

Larger versions were used without a shield; smaller ones were paired with a shield or dual-wielded with a second axe or a sword. Dual-wielding was a favorite tactic of berserkers, whose approach to defense was unending and brutal offense.

Those designed as weapons are larger and heavier, and that beard offers a crucial advantage, aside from a longer cutting edge. Here’s when the hook comes into lethal play…

When the axe is thrust or swung over or around a shield and then pulled back, the hook catches the shield—and the shield can either be pulled from the opponent’s grasp or at least momentarily pulled down or aside. Either scenario is extremely dangerous for the opponent because the next thing coming is the percussive, head-splitting chop of a second axe, a chest-piercing sword thrust, or the face-crushing edge of a shield—and there’s nothing in the way to stop it.

The hook can also sweep or trip. Tripping is straightforward, but a defender can also be hooked behind the neck, shoulder, torso, or arm to pull the opponent in so he can be introduced more formally to the second weapon and the Norseman wielding it. The Norse were, after all, always interested in travelling the world, meeting new people, and killing them.

The axe requires less skill than a spear or a sword. While a neophyte can pick up an axe and fight fairly effectively with it, greater skill yields greater mayhem and carnage. 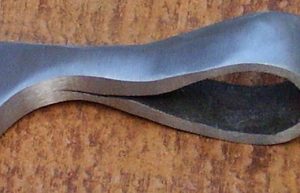 From the bladesmith’s perspective, the axe requires less skill and effort to forge than a sword. While the Vikings have a steel making and smithing history equivalent to the Japanese, nonetheless, steel was a precious commodity, and the axe allowed for the very best steel to be reserved for sword making.

A smith may use several methods to forge a bearded axe. One of the simplest is to heat a flat steel bar to welding temperature, fold it in half over itself, and forge weld the flats together. A loop or “eye” is left open to accommodate the haft. The welded bar is then forged downward to form the bearded blade, and the smith forges in bevels to form the edge.

The smith then heats the whole piece to critical temperature, about 1420 ̊ F for most steel, and quenches it in water, brine, or oil to harden it. The quenched steel is very hard and quite brittle, so it needs to be tempered or “drawn back.” A smith tempers it by heating the axe again, but only to about 300–500 ͦ F, depending on the hardness desired. 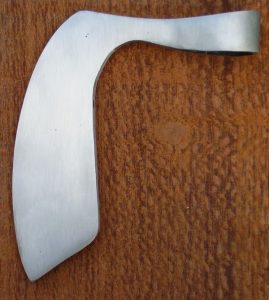 The accompanying pictures show a bearded axe I forged. The general construction technique can be seen, and the weld can be seen disappearing as it moves away from the eye until the two pieces of steel become one.

The example shown has an exceptionally long beard with an unusually narrow section of steel backing the blade. While fully functional, these traits clearly make it a fantasy piece rather than a historically accurate one.

Real Steel is Kobold Quarterly’s new series on historical and fantasy weapons, how they are made and how they are used. Todd Gdula is a professional bladesmith and will be writing up examples of his work frequently on this site.

If you have a particular question about real weapon-making—or a weapon you’d like to see discussed—please post it in the comments!