Skip to content
Home / Delve into the Depths in the Kobold Blog / Beyond Damage Dice: Dwarven Weapons 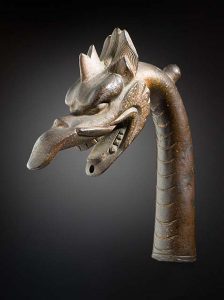 A weapon is more than the damage it deals. In combat, skilled warriors use their weapons to confuse, disorient, and disadvantage their enemies before moving in for the kill. Beyond Damage Dice ties unique maneuvers to weapons from both the core rules and the Midgard Campaign Setting, giving them a distinct impact on the battlefield. This article examines weapons crafted by the dwarves of Midgard’s Iron Cantons.

By packing liquid alchemical explosives and small iron pellets into a long metal tube, dwarf weaponsmiths have created a powerful weapon they call a dragonhead, or less frequently, a “hand cannon.” While this weapon can shoot projectiles, its limited range makes it more suitable for front-line or middle-rank warriors. The difficulty of both smelting such a weapon and creating its alchemical ammunition makes the dragonhead a rare weapon; it is generally only used by royal guards, mad alchemists, and warriors that have looted one from one of the former.

This weapon uses alchemical iron-balls as ammunition. This hollow, 1-inch diameter pellet contains a volatile alchemical fluid that is ignited by lighting a fuse atop the dragonhead. The explosion propels the ball a short distance from the cannon’s mouth.

Double Pack. By cramming twice the usual amount of explosive material into a dragonhead’s barrel, a reckless warrior can double the range and lethality of their weapon. Make a single attack roll with disadvantage. This attack consumes two alchemical iron-balls, has a range of 80 feet, and deals 2d12 piercing damage on a hit.

Fiery Discharge. By cracking open an alchemical iron-ball and pouring its liquid straight into the weapon’s barrel, you can cause the weapon to belch forth fire. When you use this maneuver as an action, you take 1d4 fire damage and make a single melee attack roll against a creature within 5 feet of you. If this attack hits, the target takes 1d12 fire damage.

A favorite weapon of dwarf gangsters, granite fists are a brutal pair of gauntlets designed specifically to break bones. These stone gauntlets are perpetually curled into a fist, and contain an iron bar inside for the wielder to grip. There are dozens of variations on granite fists, and most gangs in the Iron Cantons have a special variation unique to their gang; some fists are made of iron instead of granite, some have spikes on the knuckles, and some are shaped like open palms instead of clenched fists.

Bonebreaker. As an action, you can make a single attack roll with your granite fist against a creature that is not wearing armor and does not have natural armor. This maneuver affects unarmored creatures whose base Armor Class has been increased by class features, but not by spells. If this attack deals damage, the target must make a Constitution saving throw. On a failure, the target’s speed is reduced by 10 until it completes a long rest or is treated with a DC 10 Wisdom (Medicine) check. This reduction in speed is cumulative.

Crushing Blow. As an action, you can make a single attack roll with your granite fist against an armored or naturally armored creature. If the attack hits, the target’s AC is permanently reduced by 1 until its armor is repaired, but cannot be reduced below 10 + the target’s Dexterity modifier. This attack has no effect on creatures with magical armor, unless your maul is also magical.

At first glance, this dwarven weapon resembles nothing more than a tiny pickaxe with a very long handle. The colpik—a bastardized form of the words “coal pick” in the Common tongue—is a throwing weapon first designed by a group of dwarf miners. These common laborers, untrained in the arts of war, had to improvise weapon when beset by sling-wielding goblins deep in a coal mine. Modern colpiks are specifically designed as throwing weapons, and can be thrown with much greater accuracy than their ancient, improvised counterparts. Throughout the centuries, colpiks have been the typical weapon for dwarves untrained in martial combat.

Blunt Edge. When you make an attack with a colpik, you can choose to deal bludgeoning damage instead of piercing damage. If this damage reduces a creature to 0 hit points, the creature falls unconscious and is stable, even if the attack was a ranged attack.

Mining Point. As an action while wielding a colpik, you may make a single melee or ranged attack against a nonliving target within range. This target can be an object or a creature with the construct or undead type. If this attack hits, its damage ignores the object’s damage threshold (if any) or the creature’s resistance to bludgeoning or piercing damage.

In addition to these weapons, the dwarven tijino polearm, the nordmansch greataxe, and the northlands estoc were described in Beyond Damage Dice: Midgard Weapons.