Skip to content
Home / Delve into the Depths in the Kobold Blog / Bedorken’s Big, Bad Bag of Bones 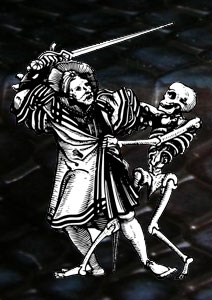 Bedorken was never a very good necromancer. Schooled by his father, the reviled Necromancer Ezekhan, he could not stomach the ghouls and zombies that were a fixture of his father’s work. Bedorken was, however, extremely talented. He excelled at conjuration and transmutation, especially the fabrication of extradimensional spaces. He also had a love of skeletons that caused him to delight in the assembly and animation of bones, which pleased Ezekhan enough to keep Bedorken from the smellier, stickier, and less predictable undead.

When Bedorken’s apprenticeship ended, Ezekhan gave his son a bone ring that animated and commanded the dead. With his ring firmly in place on his finger, Bedorken joined a group of adventurers, kept his past to himself, and made his magical talents indispensible. He could not resist skeletons, however, and in his journeys, he began to collect and animate them, to the chagrin of some of his fellow adventurers. Since the tactic of using skeletons met with success in dungeons, the others in his group grudgingly accepted his efforts. They first carried skeletons in burlap bags and animated them with the ring. Over time, they refined their tactics by using bags of holding and skeletons that they armed with leather armor and blunt weapons.

Because Bedorken’s mind never stopped working when it came to skeletons, he spent hours researching this particular form of undead each day and took many notes regarding them. The time he spent focusing his attention on skeletons paid off when the party fought and defeated a juvenile black dragon named Ezoldrak. From Ezoldrak’s scales, Bedorken fashioned a bag of holding. Although pleased with the result, he also enchanted one of Ezoldrak’s bones and shaped it so that it could replace his ring of command with a stronger one. (He put his father’s gift in the bag.) He also carved a bone amulet and enchanted it, placing it within the bag to increase the bag’s capacity. Unknown to Bedorken, as he cast the final enchantment, the spirit of the dragon entered the bag, and when Bedorken created the amulet and placed it in the bag, he created a demiplane that now houses the spirit of Ezoldrak. Anything placed in the bag becomes a part of Ezoldrak’s hoard. So, in the end, Bedorken had his new bag, but also the ghost of a dragon.

Bedorken’s new bag performed admirably at first. As time passed, however, Bedorken’s associates began to fear and shun the big, bad bag of bones, as they called it. Retrieving treasure from it became a chore. Brandishing the bag caused general panic among folk – including those with whom the party wanted to speak. Worse, the skeletons, once summoned, spoke to Bedorken. Bedorken, for his part, had not intended any of this. With an increasing sense of wariness, he employed the bag of bones to great effect in the lair of a medusa, but one comrade was slain. Bereaved, the group, after much heated discussion, placed their dead comrade in the bag until they could find a means to raise him. By this point, though, Ezoldrak had mastered his domain within the bag of bones, and he used the corpse for its own ends. When the party retrieved their friend, out their dead friend came — but as a fully animated dread zombie who immediately attacked the party along with Ezoldrak’s skeletal warriors. Shocked, revolted, angry, and engaged in deadly combat, the group turned to Bedorken for answers and for a way to extricate themselves from the situation. Unfortunately for them, Bedorken, the ring of control he had crafted from Ezoldrak’s bone, and his big, bad bag of bones, was gone.

Bedorken’s big, bad bag of bones is crafted from the hide of a black dragon. Dragon teeth fasten the drawstring, and the enchanted bone Bedorken crafted from Ezoldrak’s bone acts as a rod of control. (The original ring still exists within Ezoldrak’s hoard inside the bag.) The bag can open to engulf a Large creature. Proximity to the bag (within 10 ft.) causes unease in those below 3 Hit Dice. If brandished, the bag radiates an aura of fear (30 ft. radius); a DC 15 Will save allows those in the aura to avoid becoming panicked for 1 round. The bag grants Ezoldrak true seeing, speech (through the animated dead), as well as clairaudience to 30 ft.

Currently, Ezoldrak is in control of the bag and rod, and he seeks to return to life. Once per day, the bag can create 15 HD of animated dead, and the rod can control any combination of normal or dread versions. Once per year, Ezoldrak can summon a being who is holding the bag into the bag. When a living creature enters the bag, the interior appears identical to the stone cave that was Ezoldrak’s lair, and it can be exited by walking through the entrance tunnel (the bag’s opening), but only if the person gains control of the rod of control from Ezoldrak.

It is not possible to separate the spirit of Ezoldrak from the bag, but any method of destroying a bag of holding can negate the dragon’s true seeing, speech, and clairaudience for one day. Placing the bag inside another extradimensional space will destroy the space (and the item that creates it), then transports those within a 10-ft. radius inside the bag. If placed in a portable hole, the bag and those within a 10-ft. radius show up on the Astral Plane. Placing another extradimensional space inside the bag absorbs the other item and adds to the size of Ezoldrak’s shadow realm. Casting a spell such as rope trick inside the bag increases the size of the shadow lair. Due to protective enchantments placed upon the bag, it is difficult to destroy. Only extreme fires such as a lake of lava will destroy it.