Skip to content
Home / Delve into the Depths in the Kobold Blog / Howling Tower: Magic is Ruining My Game 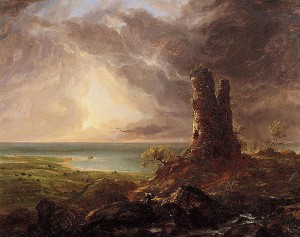 Magic is all about warping reality to do the wizard’s bidding. It doesn’t matter whether you’re Drawmij, Harry Dresden, or Isaac Bonewits. The wizard wants or needs the world to be different from how it is and has the supernatural juice to make it so.

The power to shape reality is what makes magic-users in all their guises such a kick to play in D&D. That insistent tax collector who won’t stop hassling you in the tavern? Polymorph him into a toad! Those gnolls launching spears and stones at you from atop the bluff? Pummel them to pulp with meteors. That churning lake of bubbling magma? Open a dimension door and hop across in cool comfort.

Ask anyone who’s ever owned a monkey’s paw or netted a talking fish from the sea, however, and they’ll tell you that messing with reality comes at a price.

As much as players love having all that cosmos-twisting power at their fingertips, it can be a problem for DMs. Most spells are easy for a DM to cope with. Even those that cause damage on a massive scale—fireball, meteor swarm, lightning bolt—are just magical crowd control. There are always more crowds where the last one came from.

The problem spells tend to be magical shortcuts that let players bypass the DM’s clever puzzles and problems with the waggle of a wand. An unscientific poll on Twitter generated the following list.

The top contenders are any spells that free characters from the usual dangers of getting from here to there. Fly is the biggest offender, but teleport, wind walk, and passwall draw their share of shivers from DMs.

Flight makes most sorts of en route adventures irrelevant. All of them mess with DMs by making it impossible to channel characters along predictable paths. I can hear plenty of players saying, “Oh, boo hoo, poor DM can’t railroad us anymore.” But since a lot of a DM’s planning for an adventure goes into figuring out how the villain will defend himself against incursions by the likes of the player characters, teleport and passwall make his job a lot harder.

Freeing the characters to go anywhere also introduces the spaceship problem into fantasy campaigns. The spaceship problem is common in science fiction campaigns: once PCs get their hands on a spaceship, the GM can no longer think just one or two planets ahead. He needs to think about every planet within two hyperspace jaunts of the characters’ location. That might be anything from three to three hundred planets or more, depending on the rules. The same thing happens in a fantasy realm when the dragon-infested mountains and impassable desert along the borders are no longer an obstacle to travel. The DM needs to be ready when the players take a fancy to visiting any of a dozen surrounding territories instead of exploring what’s at the far end of the valley.

A few people kicked knock into this category, too. Like the others, it gives characters easy entry into a place that the DM might have wanted to keep off limits for a while. Knock is doubly troublesome because it’s low level compared to others in this category. With knock in play, why do dungeon builders bother putting locks on their doors at all?

The second big category is divination spells. Characters who can spy on their enemies with impunity further complicate the villain’s defensive problems. It’s not enough for attackers to bypass her clever obstacles when they stumble on them; they can scope out her defenses beforehand and plan the optimal attack route.

The third category is exemplified by a single spell: silence. DMs hate silence and most other spells that can shut down a spell-wielder at a single stroke and leave the DM in the awful position of watching his villain being cut to pieces turn after turn with few effective ways to counterattack, defend herself, or escape. This is not a case where turnabout is fair play. Inflicting that same frustration on the players doesn’t increase the fun, it just spreads the frustration.

Next week, I’ll devote some thought to the implications of all this.

20 thoughts on “Howling Tower: Magic is Ruining My Game”