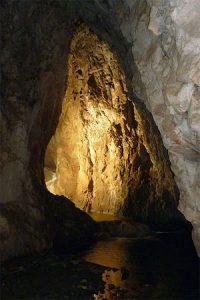 A pool of oily black water ripples as you approach.

Darkwater can be both an unexpected terrain hazard and a potential story hook for assassination plots. If your adventurers are moving through a dark and dank cavern system, they might walk right into a puddle of darkwater. If they’re mixing among the social elite in a more political campaign, they might discover this creature being used in targeted kills. Learn more about this particular ooze beyond the jump.

SPECIAL ABILITIES
Cold Stasis (Ex) Cold damage also deals double nonlethal damage to a darkwater. Its Dexterity modifier is reduced by -2 for every category of cold beyond temperate environments, to a maximum of +0. If a darkwater spends more than three hours in a frozen environment, it effectively hibernates until the environment becomes warm again.

Darkwater Acid (Ex) Darkwater secretes an acid that dissolves organic material and metal, but does not affect stone. Each time a creature takes damage from the ooze, clothing and armor takes the same amount of damage. A DC 17 Reflex save prevents damage to clothing and armor. A metal or wooden weapon that strikes darkwater takes 2d6 acid damage unless the weapon’s wielder succeeds on a DC 17 Reflex save. If darkwater remains in contact with a wooden or metal object for 1 full round, it deals 12 points of acid damage (no save). The save DCs are Constitution-based.

Darkwater Sickness A target who wears no armor or whose armor has been destroyed by darkwater acid risks darkwater sickness. To avoid darkwater sickness, the target must roll an immediate Fortitude save (DC 17) or contract this magical disease. He must be cured within 1d6 days or he will turn into a puddle of darkwater, the size of which is equal to his size. A successful Heal check can diagnose the disease.

Immunities Darkwater is immune to acid, fire, piercing, and slashing damage. Fire increases the size of a Large darkwater into Huge by causing the creature to turn into steam that allows the creature to expand and then condense into a larger size. While Huge, the darkwater has AC 12 (touch 12, flat-footed 8 [+4 Dex, -2 size]), can cause 2d8 darkwater acid damage with a touch attack, and has space/reach of 15 ft./10 ft. All other energy types and bludgeoning weapons deal only half damage to the darkwater.

Watery Goo (Ex)Darkwater can move through any sized opening, and it can move up walls, ceilings, and other vertical surfaces at 10 ft. per round. Darkwater can separate down to a drop that has 5 hit points and merge back with the whole. Small puddles tend to seek out and join with larger ones instinctively. A darkwater with 5 hit points or fewer cannot separate and dies if reduced to 0 hit points.

Darkwater is an organism that seeks out and eats any warm-blooded creatures, and its constant search for warmth draws it to such creatures. Once it finds prey, it flows and moves about just as water does, seeking to cover its foe. After it starts attacking a target, it does everything in its power to continue to attack its chosen foe.

Warmer climates allow the ooze to move more quickly than cold environments. Darkwater differs from most other oozes in that it has an excellent Dexterity score and can move to avoid blows from opponents it senses. Freezing and cold environments slow the reflexes of darkwater to a slow crawl, if not a complete comatose state, when completely frozen.

None know if darkwater was the result of an experiment with oozes or a creature that came into being naturally. Because darkwater is as thin as water, assassins sometimes use it to poison chosen targets. Mixing a portion of darkwater with strong beverages (such as a robust wine) covers most of the taste and reduces the initial acid damage in a manner that leaves the victim feeling as if he or she has a bad hangover. Initially, the rest of the darkwater might seek out its component part in that victim. After the victim turns into a puddle of darkwater, he can wreak havoc in his own household.