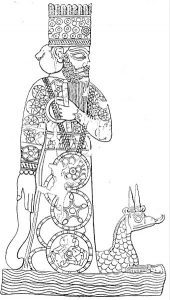 Have you tangled with alignment in your games in the past? Hunter Royall, the designer who provided us with several paladin options recently, read all of your comments to his articles and wanted to weigh in on the concept—or issue—of alignment and give you some more ideas on how to handle alignment in your game.

In my fifteen years of experience playing tabletop games, no rule or game mechanic has started more arguments than the alignment system. I have seen gamemasters cringe when a player announces his character is chaotic, and I have heard players groan when they hear another player say her alignment is lawful. Players and GMs who seem to have flexible morals outside the game suddenly become intensely staunch and rigid about the definitions of good and evil once the game begins.

Moral relativism aside, what constitutes each alignment seems to be a big problem for a lot of groups. How do you define law and chaos? Good and evil? The easy solution seems to be to let the GM decide, but sometimes it’s not that simple, and players often have good arguments for why an action fits with their character’s alignment. There is no absolute answer to this problem, but maybe I can share some perspective and help move the discussion along.

Good and evil seems straightforward: Follow a handful of the Ten Commandments and you’re pretty much golden. But are you breaking “Thou Shall Not Steal” if what you’re taking rightfully belongs to someone else, and you mean to return it to its true owner? Are you violating the spirit of “Thou Shall Not Kill” if it’s in defense of your own life or another’s? This becomes difficult because you have to weigh intent.

In general, I have come to view the gray parts of good and evil more like selflessness and cruelty. Is the character doing what he or she is doing for the sake of another person? Does the character stand to gain from helping this person? Is the character taking deliberate advantage of someone in doing so?

Let’s say the players are asked to save a child from a goblin stew pot. If they do so without caring about a reward, certainly that is a good act. If the risk to them is great and they refuse to do so without a reward, that is certainly not good but it is not really evil either. If they demand a reward when the risk is negligible or they demand a reward that is more than the parents can reasonably afford, then they are treading into the realm of evil. Certainly if they didn’t try to stop the goblins from kidnapping the child in the first place and THEN demanded a reward for the rescue… well, there’s always room in the Abyss for more souls.

Law and chaos tends to be more tricky. I’ve encountered too many players over the years who avoid lawful alignments because they can’t get away from the notion that “lawful” means they have to follow every law of the land to the letter, with no deviation. In the same vein, we all have dealt with the one player who thinks the word “chaotic” is license for their character to do whatever comes to mind without rhyme or reason.

I have found it simpler to think of this situation in terms of logic and intuition. Think of it this way: a lawful character needs to weigh each action and event against the terms of his or her code and decide how that fits. A monk who steals out of necessity but then pays back what he owes when he can is not necessarily violating a code of honorable conduct: he did steal but only because there was no other choice at the time, and he made amends for his misconduct as soon as he was able. This is still arguably honorable behavior overall.

By the other side of that token, a chaotic character is likely to be the one to make decisions based on gut instinct, an immediate and reactive style of thinking. A man is screaming and running away from some warriors? The chaotic hero likely will throw herself into the fray and drive the warriors off first, only asking what the problem was later. The party must choose between two options? The chaotic character is more likely to go with the one that feels right rather than spend much time arguing the pros and cons of each, or flip a coin and let luck decide if there’s no real difference between the two. This doesn’t mean the chaotic character acts without thinking at all—it just means she places more value in her feelings than she does in logic.

Is this a perfect system? No, and I won’t ever claim it is. It is, however, a way to avoid the same cliched ruts that so many of us fall into when deciding how alignment affects our roleplaying. This may not work for everybody, but it should at least give you somewhere to start if you’re trying to find that sweet spot that works for your group.

So, what do you think? What works in your gaming groups?

9 thoughts on “The Alignment Problem”