Skip to content
Home / Delve into the Depths in the Kobold Blog / Defenders of Midgard Are Here! Seven New D&D Themes and More 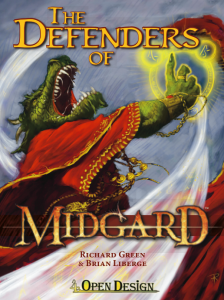 The next edition of Dungeons & Dragons is on the horizon, and players have more options than ever to get their tabletop fantasy fix. It’s in this spirit that we present The Defenders of Midgard, available at DriveThruRPG and Paizo, with 7 outstanding new themes — and lots of other crunchy D&D goodness — made possible by the generous patrons of the Midgard Bestiary for 4th Edition.

“The options in this book showcase what makes Midgard unique and fun for players. We focused on granting options that can be of use immediately, so almost everything is for the heroic tier of play. With this in hand, you can craft a Midgard player character who stands out from the PCs of any other setting.”

4th Edition D&D players now have a toychest that offers more options and new powers well-suited to adventures in a Dark World of Deep Magic. Read more about what’s included after the jump:

Designers Richard Green and Brian Liberge have really pulled out the stops for this one. Pick up The Defenders of Midgard at DriveThruRPG and Paizo!