Skip to content
Home / Delve into the Depths in the Kobold Blog / Real Steel: The Kwaiken 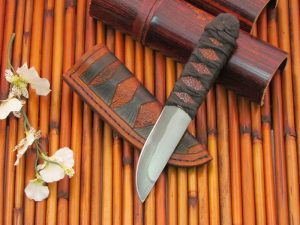 The kwaiken is like a dagger. It’s a type of small tanto, historically carried by both men and women of the samurai class. As with the tetsu no bo (kanabo), I’m having a hard time finding a reliable translation. Kwaiken literally translates to “chest knife” or “bosom knife,” but whether or not the literal translation carries the intended meaning isn’t clear to me just yet. Because it was carried in the obi, and the obi (especially on a woman) was worn on the lower chest and upper abdomen, I think the meaning is probably literal.

The traditional kwaiken has a wooden handle and saya (sheath)—very much like a shirasaya tanto—but was substantially smaller. The modern westernized version usually has a wrapped handle, which is more traditional for a full-sized sword. The sheath is often Kydex or Concealex, but I personally prefer leather…

Like most daggers and related knives, the kwaiken is intended more for stabbing than cutting although it does have a curved blade that makes it a fairly good cutter if the geometry is correct. While any well-made kwaiken works well for self-defense, I consider them to be primarily art knives.

It’s a Nice Palette for the Bladesmith

The blade, by its very nature, is simple and elegant. It’s small—only 6–9 in. overall—and easy to either forge or grind. The only real options are whether to have a curved or straight spine. The blade is wide enough to hold a decent-sized hamon, and the handle is large enough to allow for some creative maki (wrapping), underlay (traditionally it’s stingray skin, but I use leather, copper sheet, and whatever else looks good), and menuki (handle charms). The menuki are a good opportunity to give the blade a “personality” if you use it in game. I have recently been using raptor wing menuki, but it’s common to see bats, spiders, dragons, snakes, lizards, fish, and flowers.

How I Make One 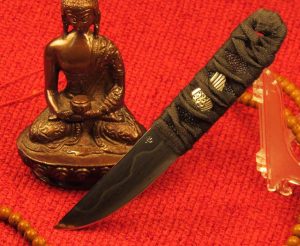 First, the blade is profiled, and the bevels are created by either forging or grinding. Hardening and tempering are next, followed by finish grinding and polishing. If the blade is to be etched or blued, that comes next, followed by the application of whatever underlay is being used, the menuki, and finally the wrap. The wrap is held in place and hardened with epoxy. Although not traditional, the epoxy is necessary because the small handle on this knife lacks the fittings and furniture that help hold the wrap in place on a full-sized sword. Finally comes sharpening and signing the blade with my maker’s mark.

Because they are simple and relatively easy to make, they allow me to offer nice-looking Japanese-style blades to customers for whom more traditional Japanese-style blades are out of reach. They also give me a small palette to try out an idea and finish it in a reasonable amount of time. If the idea is good, I may try it on a larger piece. If it stinks, well, I usually give it away.

8 thoughts on “Real Steel: The Kwaiken”