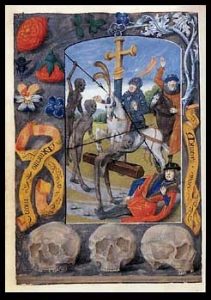 For an experienced adventurer, the awe and horror of the living dead has long since faded. Zombies seem commonplace and ghouls are just another form of sewer trash. But when a skeleton with bones clad in decaying iron turns a sword to rust, the adventurer again knows fear. The Pathfinder Roleplaying Game Bestiary introduced a new dynamic for altering undead, the simple template. Presented here are seven additional simple templates for your zombies, skeletons, and ghouls, along with expanded rules for creating variant undead…

This skeleton’s warped bones clatter and grind in ill-fitting joints, a silent grimace permanently splayed across its fleshless skull.

The re-animated skeleton of a torture-victim, a torment skeleton seeks to relive—and spread—its dying anguish. A torment skeleton is created when deathwatch and any inflict spell are cast in addition to animate dead. The skeleton must have a Charisma of 10 + the inflict spell’s level to use the spell as a spell-like ability. In addition to the skeleton template changes, make the following adjustments to the base creature…

Challenge Rating As a normal skeleton + 1.

Abilities As the standard skeleton, but the skeleton gains a bonus to its Charisma score equal to half its racial HD (round up, minimum +1).

Spell-like Abilities A torment skeleton can use the same sort of inflict spell cast at its creation as a spell-like ability (1/day), provided it has the requisite Charisma score. The skeleton’s deathwatch ability allows it to sense the status of nearby targets, including other undead, to choose targets for its inflict spell.

Lifesense (Su) A torment skeleton notices and locates living creatures within 60 ft. as if it had the blindsight ability.

Deatchwatch (Su) A torment skeleton is under the constant effects of the deathwatch spell with a range equal to its lifesense ability.

A gaunt humanoid form lopes along in a cloud of rotten spores, a malevolent hunger in its sunken, hollow eyes.

A mold gaunt is created when plant growth is cast in addition to create undead on a mold-covered corpse. Unlike normal ghouls, mold gaunts bury themselves with their meals, appearing as nothing more than a pile of moldering bones and flesh. In addition to the ghoul template changes, make the following adjustments to the base creature.

Spore Cloud (Ex) Creatures adjacent to a mold gaunt come within range of its spore cloud, an aura of fine mold spores that surround a mold gaunt. Adjacent creatures must make three successful saves (DC  10 + 1/2 mold gaunt’s HD + mold gaunt’s Cha modifier) to avoid three different effects. Once a creature has successfully saved against an effect of the spore cloud, it is immune to that effect for 24 hours.

A wash of heat and wisps of smoke—but no flames—rise from this burned corpse, and a trail of ashes falls in its wake.

Legend tells of a ghoul risen from the corpse of a cannibal burned at the stake for his vile deeds. A galsh, also called an ash ghoul, is created when a pyrotechnics spell is cast in addition to create undead on a charred corpse. In addition to the changes for the ghoul template, make the following adjustments to the base creature.

The templates found in this series use a simple mechanic for their creation: follow up animate dead or create undead with another spell to imbue the creature with additional powers. Also, as noted in the Pathfinder Roleplaying Game Bestiary, some of these variant templates are stackable. These variant undead count as twice their normal number of HD for creation purposes. Once controlled, they count normally against the controller’s limit. In the case of ghouls, these templates count as ghasts for the create undead spell.