Skip to content
Home / Delve into the Depths in the Kobold Blog / Real Steel: The Spear 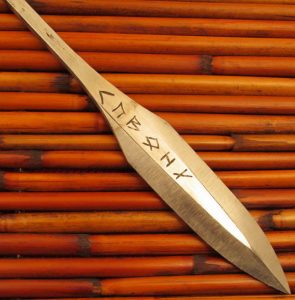 At least one version of the spear is found at some point in the history of every human culture. In its simpler forms, it is easy to make, easy to learn relative to other weapons, and deadly. Early versions were a simple sharpened stick. The first improvement was fire hardening the point. Later versions had bone or antler tips, followed by flint, copper, bronze, iron, and finally steel—the metals not necessarily in that order and dependent on the region.

Fighting spears fall into two general categories: melee and thrown. Spears intended for melee usually have a double-edged blade and a good point, for the spear must be good at cutting and thrusting. Thrown spears, including javelins, may or may not have a cutting edge(s), but the focus is on the point. The abilities to be thrown accurately and penetrate deeply, in this case, outweigh the ability to cut…

My intention is to cover specific types of spears in more detail later, but for now, let’s talk about the “general purpose” spearhead shown in the pictures. I made this one by stock removal. It’s ground from 1” × .25” 1084, which I think I’ve mentioned is my all around favorite steel. It’s on the small side with a total combined length of tang and blade of only 12” because I made it for my son, Sam, and he’s still half a pint. 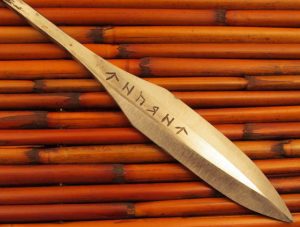 Before I get into how I made it, take a look at the runes engraved on both sides. Because this is essentially a smaller version of the fighting spears in Lord of the Rings, I used Tolkien’s dwarven runes, which he based on Elder Futhark Germanic-Norse. One side says “Samuel”; the reverse says “Reaver,” which is the name he picked for the spear.

When I make a blade like this, whether by forging or stock removal, I like to form the blade first and leave the tang for last. I do this because it leaves me something substantial to hold onto while I work on the blade. I ground the profile (silhouette) first, then the bevels. This is the first time I’m showing you a double-edged piece—and that’s important. A blade like this, which is basically a dagger blade on a really long tang, has four grinds—all of which meet at the point. If I hadn’t left large flats for engraving, the bevels would also have met on each side. The reason this is significant is that the human eye can detect a mistake of only a couple thousandths of an inch. All these angles coming together are “hotspots” for errors. In fact, the tip of this spear has a bevel issue I need to correct. Can you see it?

Creating the tang is relatively simple. In this case, I started with band saw cuts and finished on the belt grinder. If it were forged, the tang would be drawn out by hammer or hydraulic press. The holes are for “glue pins”: when I set this in the haft, I’ll use epoxy, which will fill the holes and help hold it in place. 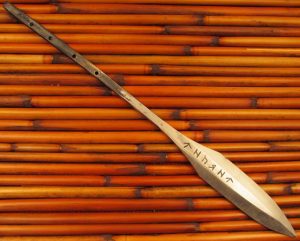 After rough grinding and engraving comes hardening and tempering. Double-edged blades are notorious for twisting and warping during hardening, but there are a few things that can minimize the risk. I use clay hardening, am very careful not to overheat, and leave the blade on the thick side—all these things usually allow me to have a trouble free hardening. Because a spear will be subjected to a considerable amount of abuse, toughness is more important than hardness, so I temper them fairly soft.

There’s not much point in putting a fine finish on a spear—it’s going to get dinged up. A serviceable satin finish will suffice.

The blade is set in the haft, and it’s done.

The forge is now open for the season, and I’ve done a few warm up pieces. There’s good stuff coming soon!

12 thoughts on “Real Steel: The Spear”