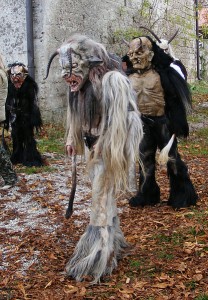 When we set out to design the Midgard Bestiary for the Adventure Game Engine (or AGE) system, we knew it was going to be a unique project from the start. The book represents not only the first stand-alone, third-party game supplement for the AGE System, it’s also the first time more than five years of Open Design monsters have been presented in a single volume, and the first time those creatures have been made available for the system that powers the Dragon Age Dark Fantasy Roleplaying game from Green Ronin.

Because of this, it was important to me as lead designer that the book pull double duty as both a great addition to the AGE system and as a great introduction to the world of Midgard for AGE game masters and players. So how did we do it?

With monsters, lots and lots of monsters.

Original Adversaries
At its core, the bestiary is a monster book. But because of Open Design’s rich heritage of fiendish monster design, the creatures presented within its pages make for some truly original adversaries. One of the greatest challenges — and thus most rewarding successes— of designing the monsters for this book was taking creatures and their unique special abilities from three editions of the world’s most popular role-playing game and making them compatible with AGE.

This means monsters in this book do things no other AGE adversaries do, presenting new challenges for players and new opportunities for game masters. From the opponent-controlling powers of the Spark, to the Gilded Devil’s ability to turn items of wealth against their owners, these monsters offer much more than orcs and goblins. The creatures in this book push the limits of AGE system’s innovative stunt system, providing game masters with plenty of inspiration for expanding the game’s possibilities.

Why AGE System?
Heralded as an old-school game with modern sensibilities, gamers around the globe have fallen in love with the fast and furious combat and simple game play of the AGE system. With the system only part way through its initial production phase, however, the core rulebooks present just 36 detailed adversaries to challenge your players. Compare this to the literally thousands of monsters in print for older game systems, and it becomes easy to see why this book adds so much to the game. With more than 50 detailed and exciting creatures, the Midgard Bestiary more than doubles a game master’s arsenal of adversaries. While the book was designed to allow AGE players to move their game to Midgard, game masters can with little effort drop them whole cloth into their existing AGE campaigns no matter the setting.

10 Hooks Right Now
To showcase how the monsters in this book can spark adventure in any campaign, here are 10 quick adventure hooks drawn from specific adversaries from the bestiary:

1. Fishermen from a small village have gone missing, and those that do return are struck with a strange fever that kills them within days. (Bone Crab)

2. A constant, grieved wailing echoes in the boughs of the queen’s labyrinthine garden. It’s said the prisoners are free to leave if they can find a way out without their eyes to guide them. (Eye Golem, previewed on the Green Ronin site)

3. The deaths began after a powerful storm shook the forest. Now the mutilated corpses of woodland creatures and a few of the more reclusive villagers have been found in the at the edge of the forest, and even the trees seem to shiver in fear when night falls. (Ala)

4. A strange, cloaked figure carrying finely wrought blades has been seen in town asking for information about a powerful artifact. The rumors say he’ll pay any price. (Arbonesse Exile)

5. The singing stone is just another spot on the river for many. But lately the shoals at its base have become littered with the bones of shattered ships, and fewer merchant vessels seem to be making the journey to the city. (Lorelei)

6. The king has been acting strangely, and lately has begun draining the treasury to present gifts of expensive jewelry to courtiers. (Gilded Devil)

7. The howling started a fortnight ago, a terrible baying that shakes the nerves. Certainly the sound convinced the villagers to lock themselves inside their modest homes, and those caught out of doors when the howling starts are found dismembered in the morning. (Lich Hound)

8. The gnome traveler was a friendly sort, sharing songs and good stories for a bite to eat and bit of wine. The way his eyes shone as he spoke about “lost treasures” and “untold riches” were enough to make any man want to head into the forest to see such wealth for himself. (Niemheim Enchanter)

9. Three woodcutters have met quiet deaths in the forest, but their bodies betray no obvious signs of injury. Only their staring eyes betray the stark horror of their deaths. (Death Butterfly Swarm)

10. No one travels the old swamp road much anymore, though its the shorter route. Stories say the souls of those who died lost in the trackless mires protect the swamp’s secrets from the living. (Putrid Haunt)

11. A lair of thieves in the city catacombs was ransacked and the guild members slain. While the watch captain cares little for the brigand’s loss, he’s worried what new threat has taken their place beneath the city streets. (Roachling)

12. A master of the arcane is seeking adventurers for a dangerous journey into the wastes. None have returned so far, but that hasn’t stopped him from making more offers or adventuring parties from taking the job. (Bemmean Wizard)