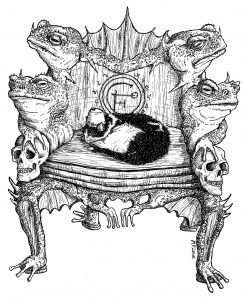 “Indeed, Master—it is Master, isn’t it, not Mistress?”

“Ah, the dress. No, it is indeed Master. I’m merely wearing ladies’ clothes today as a mark of respect for our sister witches and their kin.”

“How strange, Master, you must be a mind-reader. Sorry, are of course a mind-reader. I’ve just been researching the old folklore of hedge witches and their somewhat dubious abilities to cure all ills.”

“Then get on with it, but just this once, my congratulations upon securing the esoteric monocle. Now, on with your description, or I’ll have you flogged with this enormous cheese grater. We’ve important work to do.”

It must be pretty frustrating in fantasy worlds—if you have the cash, the connections or the rank, generally whatever illness befalls you can be cured, any injury staunched, and even death can be overcome. For us lot in the gutter, life is different. We have to rely on other lotions and potions that may—or let’s be honest in all likelihood won’t—work.

Here then is a list of ten such cure-alls. Guaranteed by passing peddlers to remove warts, counteract level-drain, and prevent aging and the attentions of unwanted outsiders. The joy of these items is not in the attempt to sell them to the PCs (although that could be fun) but the reaction of NPCs to their faith in these objects, particularly as they are generously handed over as rewards to troubled and inflicted PCs.

There could also be a fun little adventure with the local Thieves’ Guild and a drunk bishop running a racket among the local populace for such “cures.” Those local rogues are going to get pretty cross if a fancy PC cleric wanders in and starts curing everyone for free. Having such side treks intrude upon events in major adventures can be a rewarding angle to exploit from time to time.

You may, of course, decide that there is more to these cures than meets the eye—perhaps they truly form the basis of elixirs, or are integral and obscure versions of other potions; it’s your campaign so you get to choose.

The companion article to this piece—“Strange Debilitations”—might be of interest to you. With a list of unheard-of illnesses, do the PCs rush about trying to find out who—or what—is behind these strange maladies then try anything to cure them, or do they simply shrug their shoulders and leave the hopeless peasants to their petty lives?

The wondrous More Whispering Homunculus collection is available for your delectation in the Kobold Store!