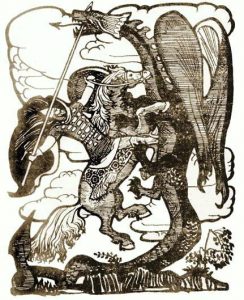 Born of malice and contempt from corrupted magic, this vile dragon scours the landscape, attempting to sate his unwavering hunger.

General Xaldraxis is an ancient dragon commander, having survived since the dawn of man. With a temper forged in a violent age, he emerged victorious after defeating entire swaths of foul creatures, beasts, and monstrosities. For his victory in defeating all others, the dragon pantheon granted him a sacred boon that allows him to fight with the strength of multiple heads.

Xaldraxis’ existence is shrouded in much discussion and debate. Loremasters of old speak of his creation as a birth of necessity as all that is good and just overwhelmed the world. As a means to counteract the imbalance in the world, Xaldraxis was created by a power unknown and unleashed to wreak havoc and bring fear and terror back to the minds of mortals…

Xaldraxis in Combat Xaldraxis is a true terror on the field of battle. He exerts his strength by diving straight into the fray in an attempt to shred his opposition. He is intelligent and does not willingly make decisions that puts him in bad situations. If possible, he leverages all necessary resources to ensure his victory. When Xaldraxis is first bloodied in combat, he spawns a second head that enters the fight. This is a boon that was gifted to him for his past victories.

This dragon rarely travels alone, however, and commands an army of kobolds that number in the thousands. Augmenting his army further is an enclave of wyverns. Xaldraxis commands a formidable army that has many societies concerned for their safety.

Lore (History DC 18) Known as a leader amongst beasts, Xaldraxis commands a vast army of kobolds and wyverns. Leveraging his strength and dominance over them, they perform the brunt of his foul deeds. Whether raiding river towns or pestering innocent farmsteads, Xaldraxis ensures his dominance is known and any resistance shall be met with malice.

How to Use Xaldraxis is a great antagonist to use in a long term campaign or as a side-plot that integrates into a larger ongoing story. He is a perfect “final” enemy to use in a climatic event that allows for players to feel a bit of accomplishment for overcoming such a formidable foe.

Xaldraxis also makes a great complementary monster to a more sinister and vile master. If you are working through a campaign that will take your party to higher levels, you may have Xaldraxis be the underling (or even the mount) of a more powerful wizard or dark being.

TRAITS
Triple Actions Xaldraxis acts three times in a round on initiative counts 25, 15, and 5. He has a full set of actions on each turn and cannot delay or ready actions. He can use one immediate action between each full turn.

TRIGGERED ACTIONS
Bloodied Rebirth The first time Xaldraxis is bloodied, he sprouts a second head. That head has its own separate set of encounter and recharge powers. Its initiative count is 20.

ABOUT THE AUTHOR
Matt James When not freelance writing for DUNGEONS & DRAGONS®, Matt is chained to his desk working endlessly on developing his website; Loremaster (http://www.loremaster.org) or www.twitter.com/matt_james_rpg