Skip to content
Home / Delve into the Depths in the Kobold Blog / Warlock’s Apprentice: The Bloodstone Gargoyle of Bratislor Pass 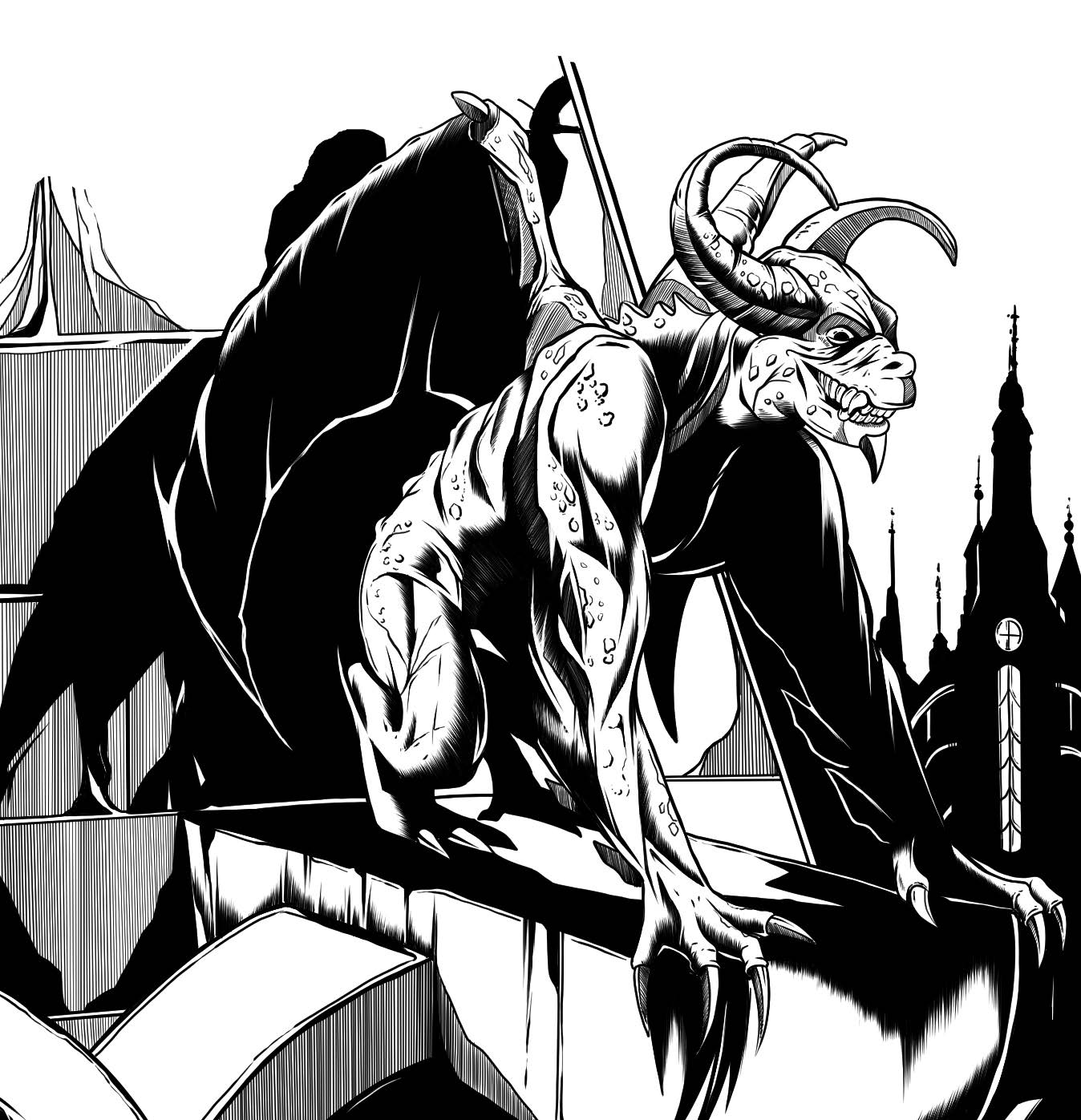 A hulking effigy carved from solid bloodstone clings to the sanctuary steeple. A closer look reveals a sinister winged creature of elemental earth that bears the loathsome likeness of a demonic statue with long, curving horns and a prodigiously wicked grin. The sound of grinding stone and the blinking of two luminous crimson eyes precede the gargoyle’s lightning-swift assault.

The Bloodstone Gargoyle of Bratislor Pass

Blood and Stone. Journeyed pathfinders and loyal servants of the Blood Goddess Marena know of a seldom-used mountain pass, south of Bratislor along the Great Northern Road, where a secluded monastery is situated in grim isolation. Here, the Bloodstone Gargoyle of Bratislor Pass watches balefully over the crumbling walls of the Vermilion Abbey from atop its black granite steeple. A coterie of ghouls and vampire spawn occupy the abbey’s lightless sanctuary, patiently awaiting the return of their Red Sister mistresses under the tireless guidance of their unholy sentinel.

Grim Sentinel. Born from a massive slab of chalcedony, the Bloodstone Gargoyle of Bratislor Pass gleefully serves the cruel interests of its sanguine masters and has watched over the Vermillion Abbey’s mountain sanctuary for at least a century. The precise origin of this peculiar elemental menace remains a mystery, for none quite like it has ever been chronicled. Yet despite this surreptitious history (or perhaps because of it), the tale of the guardian has become a prized fable among Midgard storytellers with a fondness for horror.

Evil to the Core. An accursed gemstone known as the heliotrope heart is buried deep within the bloodstone gargoyle’s stony chest. This magical orb can only be retrieved if the gargoyle is slain, at which point the rest of the earthen creature crumbles to dust. A scant few entities are even aware of the orb’s existence, such as the Arch-Devil Parzelon, Midgard’s most learned sages, and the Red Goddess Marena herself.

False Appearance. While the bloodstone gargoyle remains motionless, it is indistinguishable from an inanimate statue.

Bite. Melee Weapon Attack: +7 to hit, reach 5 ft., one target. Hit: 8 (1d8 + 4) piercing damage plus 7 (2d6) necrotic damage. The target’s hit point maximum is reduced by an amount equal to the necrotic damage taken, and the bloodstone gargoyle regains hit points equal to that amount. The reduction lasts until the target finishes a long rest. The target dies if this effect reduces its hit point maximum to 0. A humanoid slain in this way and then buried in the ground rises the following night as a vampire spawn under the bloodstone gargoyle’s control.

Each time the gargoyle or the gargoyle’s companions do anything harmful to the target, it can repeat the saving throw, ending the effect on itself on a success. Otherwise, the effect lasts 24 hours or until the gargoyle is destroyed, is on a different plane of existence than the target, or takes a bonus action to end the effect.

The Bloodstone Gargoyle of Bratislor Pass serves as the sleepless sentinel of a crumbling mountain temple to the Blood Goddess Marena, where he perches upon an ebon steeple. Known as the Vermillion Abbey, this black granite edifice also houses a restless pack of ghouls and a small cadre of vampire spawn birthed from the gargoyle’s sinister bite.

The craggy region surrounding the bloodstone gargoyle’s lair in Bratislor Pass has been corrupted by the creature’s unnatural presence, creating the following effects:

If the bloodstone gargoyle is destroyed, these effects end after 3d6 days.

Characters could find themselves encountering the Bloodstone Gargoyle of Bratislor Pass for a variety of reasons:

1 thought on “Warlock’s Apprentice: The Bloodstone Gargoyle of Bratislor Pass”