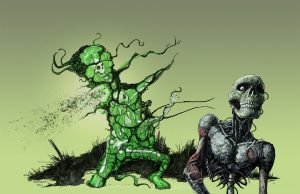 One of the fun events at conventions like Gen Con and PaizoCon is Adam Daigle’s “Monster in an Hour” seminar, where he creates—you guessed it—a fully-statted and illustrated monster in an hour. Mr. Daigle was crowned King of the Monsters in 2009, and since then has contributed to the Bestiary 2 and many other projects. The art this time comes from Chris McFann, Dave Mallon, and Jessica Zarnofsky (the latter two after the jump).

Barely noticeable, this transparent puddle of slime slinks after prey and hoping to infest its victim and ride within its body.

Special Abilities
Forgetful Strike (Su) A mnemonic slime can forgo dealing damage to an opponent in favor of wiping their temporary memory. With a successful slam attack, a mnemonic slime can cause its target to forget the events of the previous 1d3 rounds. A successful DC 16 Will save negates this effect.

Infest (Ex) As a standard action, a mnemonic slime can attempt to infest a Large or smaller mortal host who has any opening, such as a mouth, nose, ears, eyes, or open wounds. The mnemonic slime must make a successful touch attack. This action draws no attack of opportunity. The target must succeed on a DC 18 Fortitude save or become infested by the ooze.

The victim of this symbiosis receives a +4 bonus to Bluff, Diplomacy, and Disguise checks but, otherwise, keeps all normal statistics. An infesting slime controls the victim like a puppet similar to a dominate monster spell, but must hide its seeping transparent jelly from observers or reveal the host’s true affliction. Any time a mnemonic slime pushes a victim to injure itself, the victim receives a new saving throw. Others can notice this condition with a successful DC 17 Sense Motive check.

Each minute a mnemonic slime infests a host it inflicts 1d4 points of Intelligence and Wisdom damage if the victim fails a DC 18 Will save. This ability damage effect does not trigger an additional save to rid the victim of the slime.

Vulnerabilities (Ex) A mnemonic slime takes 1 additional point of damage from weapons made of cold iron. In addition, when infesting a host targeted by channeled negative energy, the creature must make an additional saving throw equal to the initial save or be ejected from the host. Finally, if a mnemonic slime is covered in at least three pounds of salt, the creature takes 4 points of Constitution damage each round until it can wash off the salt.

These strange intelligent oozes live in wet areas, as frequently found in the water as on land. They dislike their ill-defined form and relish in walking around inside a body. Sages suggest the first of these creature seeped over from a fey realm, and their aversion to cold iron seems to back up this claim. Now they populate dripping jungles, moist rainforests, and dense swamps. These creatures are never found in saltwater, as the substance is deadly to mnemonic slimes, withering the creatures into a grainy sludge in minutes. These slimes hate moving water and have trouble moving in it. Places with water treatment that agitates water rarely see an infestation of these creatures.

As mnemonic slimes infest victims, the ooze remembers, collecting memories and adding them to its improvised repertoire of humanoid behavior. Old mnemonic slimes grow in their abilities and increase the control over their body slaves. 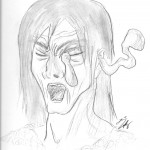 People infested with a mnemonic slime initially look as if they are sweating, a glistening of sweat covering their skin. As the creature works within their victim, the transparent ooze begins dripping from their nose, mouth, and eyes, and even open wounds and other weird openings to the physical form. 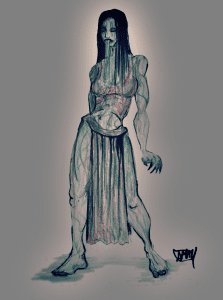 I ran this event for the first time at NeonCon 2010 and only had 4 people show up, so walking into a packed room at PaizoCon 2011 was a bit intimidating, but we pulled it off and made a great creature.

For those of you not familiar with Monster in an Hour, I stand in front of a crowd of folks, explain my monster design process while guiding the emerging creature from the audience’s suggestions, feedback, and raised hands. I call it crowd-sourced monster design. I hope, in the course of an hour, to encourage people to make their own monsters custom tailored to whatever encounters their players face. All GMs make NPCs, and building monsters is only a tiny bit more complicated, but you have far more freedom.

Those of you reading this that were there might notice a few changes that occurred in development. I hope you approve of them. After the event a couple of friends brought up how most oozes have a Dex of 1. I somewhat worried about that until I remembered the shoggoth, carnivorous blob, slime mold, and slithering tracker all have fair to good Dex scores. The first change I tinkered with was making it small. At the time I didn’t want to recalculate things, but after getting home and running the numbers, it made a lot of sense. The attack bonus and AC goes up by +1 when Small, and it helps the Stealth bonus by +4; something we definitely agreed was a good thing.

We talked about many different special abilities, but most of them were connected to its ability to infest, so I wrapped them all up into that special ability.

There were some good ideas that felt out of sync with this monster. While all great ideas, you can’t give a monster too many toys to play with for two different reasons. First, it just gets unruly, especially for the chosen CR. When you start adding tweaks and special abilities, it can affect the CR beyond the guidelines presented for its regular statistics. Second, most monsters have a lifespan of just a few rounds. If you give them too many options, they never get to use them. There are exceptions, but this is usually the case.

I really liked some of the ideas about transferring an effect by a gaze ability, and the idea that it could aerosol itself to spread the affliction, so might steal those ideas for some future monstrosity. So, thanks!

Thanks to my friend in monster design, Jesse Benner, for attending. He asked me in the bar just before the event if it would help him, and I told him it would help me, and the design of the monster, if he was there. So, thanks Jesse for attending and lending your skills to our creation. Thanks also to the artists attending who sketched our monster as we were building it. We appreciate all the illustrations.

After the event, I wished I would have had the prescience to get everyone to sign a sheet so I could list y’all as contributors, but I didn’t think about it until it was too late. You all know who you were are, and I greatly thank you for attending my event. Even if you didn’t shout out a suggestion, your raised hands for votes, and your hour spent in my monster vault with rapt attention means so much to me you don’t even know. Go forth and create monsters! See you at the next Monster in an Hour.