Skip to content
Home / Delve into the Depths in the Kobold Blog / Unlocking the Warlock: A Look at the Warlock Grimoire 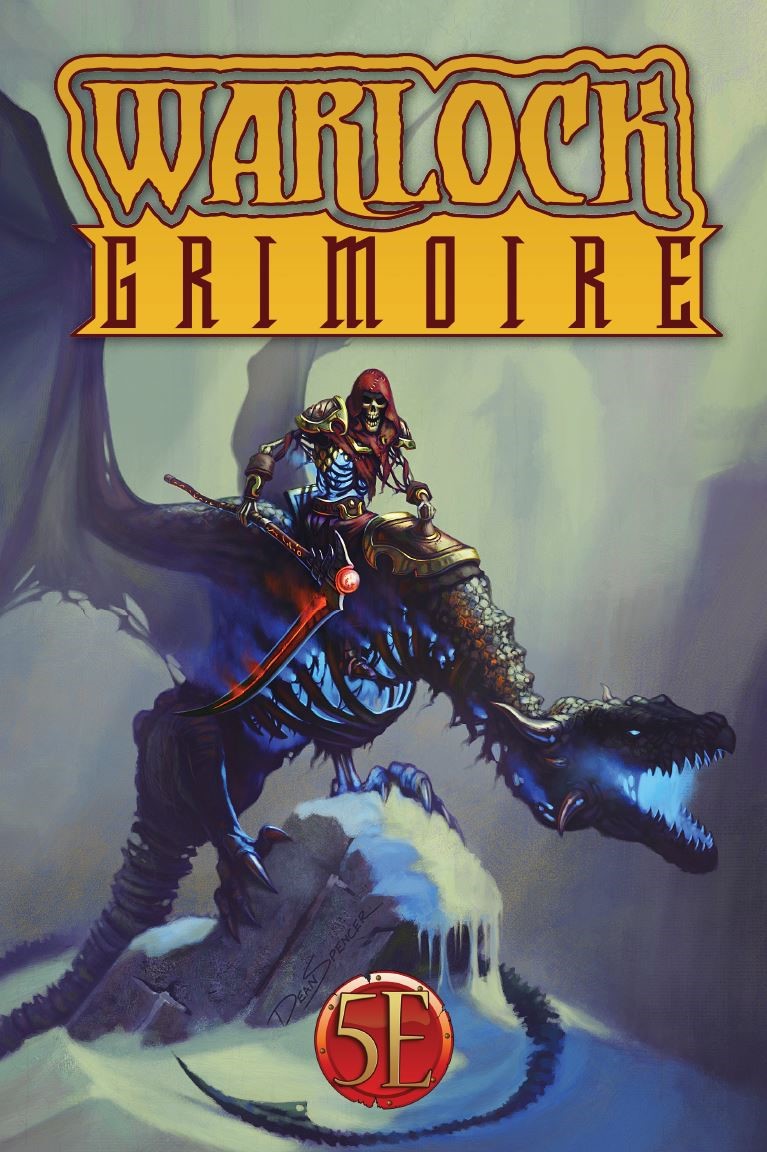 If there is something that I think sets the world of Midgard apart from other campaign settings, it’s not the depth of the world building, deep though it is. After all, there have been quite a few very complex roleplaying game worlds in the past. (Glorantha, I’m looking at you.) What makes Midgard unique to me is how immanently playable its worldbuilding is. We’ve heard it said before how there are “powder kegs baked into the setting.” What this means is that the Kobolds have gone to great lengths to build tensions and rivalries into every country and locale. There are inequities, injustices, politics, plots, prejudices, and resentments all over the map. All of it is on the verge of boiling over, so anywhere you look, things are just one carelessly tossed match away from exploding. What’s so great about Midgard is how much room there is for a GM or a player to make it their own, to take what the setting offers, pick a region, and give things a little push.

But I’d add to this praise another point—how the lore of Midgard is so wonderfully layered. There’s sufficient material that it is probably impossible to have a handle on all of it. There’s just so much! Oh, I’m trying to absorb it all, and the Kobolds certainly seem to have done so, but there’s no need to be intimidated. You aren’t required to hold it all in your head at once to play. Just pick your area and zoom in there. You want to play in Zobeck? In Per-Bastet? In Stannisgard? In Triolo? Go look up the locale in the Midgard Worldbook, read a few pages, check out the adventure hooks, and off you go.

Now, you can stop there. Everything you need is right there. You can work the rest out for yourself. Or if you like, you can go further. There are supplements, such as the amazing Zobeck Gazetteer, Tales of the Old Margreve, and Demon Cults & Secret Societies, that let you dive deeper into the lore, expand your knowledge, flesh out your understanding. And there are the nearly two-hundred adventures written for 5E that build off of and add to that lore. And of course, there are articles on the Kobold Press blog.

And now there’s the Warlock Grimoire. This 296-page hardcover volume is so chock-full of fascinating and useful material that you wouldn’t be amiss to call it the Midgard Worldbook, vol. 2. What it is, though, is a compilation of the first ten issues of the Warlock zine. What’s the Warlock zine, you say? Well, if you’re here, you probably don’t say that, but just in case you do, let’s have a refresher. Warlock is the zine published by Kobold Press, available as a Patreon. Each issue is a twenty-eight-to-thirty-two-page booklet, full of articles on various places, people, institutions, histories, legends, and monsters of Midgard. There’s also the Warlock Lairs booklet, which features an adventure set in the world of Midgard and generally utilizing monsters from the excellent Tome of Beasts and Creature Codex. Together, they make the Warlock Patreon an invaluable resource and, frankly, a fantastic bargain: seven issues a year plus one special issue plus twelve double Lairs per year. And now, to celebrate their success, Kobold Press has released the Warlock Grimoire.

The Warlock Grimoire is a compilation of the first ten issues of Warlock, plus an “entire Warlock’s worth” of new, never-before-seen content. The book kicks off with “Folkways of the Ironcrags” by Wolfgang Baur himself. In it, you learn of six “Joyous Festivals” celebrated in the dwarven cantons. I’ve got to get my players to visit the Twin Cheese Festivals of Bundeshausen and Kubourg! Really, I have.

Then there’s “Feast Halls of the Northlands,” which reviews four famous halls. Did you know that you have to succeed on a DC 18 Wisdom save even to attempt an insult in the Great Moss Hall of the trollkin? You do!

There’s an invaluable map of Beldestan and its surrounding regions that includes detail not found on the Midgard Worldmap. There’s a breakdown of the three types of folk who comprise the “Swallowed” written by Richard von Bleichert. These filthy folks live below the Gullet in Zobeck’s Undercity, and they divide into the “Grubbers,” the “Mudlarks,” and the “Toshers.”

Did you know that you can hang yourself on the World Tree, just like Wotan did? If you survive three death saves at Wotan’s Gallows, you can win the answers to five questions, learn the Rune Knowledge feat, or gain the ability to cast speak with dead once per day. Willing to risk it? Personally, I think I’d rather visit the Squirrel Court of Yggdrasil and watch the little varmints bend the truth. But each to their own. Richard Green certainly provides enough here for all tastes.

A place I never want to go (but maybe need to send my players) is the Plane of Mot. This haven (heaven?) for the undead features deserts of ground bone, disgusting forests of “cartilaginous masses” covered with fine black hair, rivers of tears and blood, skull ziggurats, and the Eternal Palace of Mot.

But maybe the City of Brass is more your speed? Jeff Grubb starts your tour and provides you with a new creature to populate the city—the Jann, servants of the genies made of multiple primal elements. While Steve Winter provides four pages of hooks to get players to or from the City of Brass. And Richard Green highlights several wonderous bazaars one might visit in the city.

Chris Harris gives us a history of vampirism and introduces us to Matvei, the Wendestal Devil, a centuries old vampire who, though utterly evil, is a thorn in the side of Prince Lucan of the Blood Kingdom.

Troy E. Taylor offers us a delicious 10th-level adventure that emmeshes PCs in the River Court and tangles them up with the Wild Hunt. Richard Green details the mysterious City of Blue Blocks, a marvelous place built around and atop ten translucent blue blocks of alien construction that were magicked into Midgard at the climax of the Mage Wars. Map included and enough hooks for several sessions’ worth of intrigue and fun.

Jon Sawatsky introduces us to Phosus, the Dread Wyrm of the Firefalls of Ghoss, a huge, chaotic evil dragon. Meanwhile, Brian Suskind introduces us to several notable dragon turtles that swim in Midgard’s seas. Speaking of aquatic beings, Shawn Merwin gives us “Variant Undine” of rivers, lakes, and sea. Moving onto the land but sticking with reptiles, James J. Haeck details Baal’s 1st Legion of the Mharoti Dragon Empire. And Kelly Pawlik gives us monstrosities large and small for those looking to populate the Wasted West with something more than dust goblins. Richard Green introduces the “Haunted Stone Giant.”

There are plenty of new PC options too. Sarah Madsen gives us the new bard subclass, College of Shadows. Hanna Rose mystifies with the “Enigma” background. Kelly Pawlik gives us a new rogue subclass, Herald of the Ebon Star, and the new background, Ghoul Imperium Deserter.

And all of this is just the briefest overview of the contents, which includes eldritch horrors, thieves’ guilds, elven courts, dragon sultans, magic gardens, distant realms, as well as six subclasses, thirteen NPCs, twenty-eight spells, forty-four magic items, and forty-four monsters. And there are four entirely new pieces, including Lysa Chen’s “The Wondrous Women of Perunalia” with a host of new NPCs; Dan Dillon’s “Rays of the Undying Sun,” new subclasses for paladins and rogues who wish to join an order devoted to Khors; and Brandon Hodge’s “Shifting Seas: New Adventures Along the West Coast Road,” filling us in on Barsella and the West.

The Warlock Grimoire really is a masterful tome of storytelling and design, a worthwhile addition to your Midgard collection, and a valuable aid to the GM looking to delve deep into one of the best campaign settings ever created. I can’t think of anything better—at least not until volume two!

2 thoughts on “Unlocking the Warlock: A Look at the Warlock Grimoire”