Skip to content
Home / Delve into the Depths in the Kobold Blog / Trapsmith: Smoke and Mirrors, Goblin Style 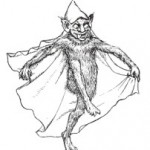 Goblins favor the ambush, because then, for a brief moment in time, goblins have the upper hand. A successful ambush is the stuff of legend among goblins, and with each recounting the tale becomes taller and pride fills the scrawny chests of the surviving goblins. Pride in one’s work is a rare and precious thing for a goblin.

For generations goblin trapsmiths — insane tinkerers all — have tried to extend those blissful few seconds of superiority that the ambush gives into minutes. Their latest improvement is a diabolical engine of putrid smoke and broken mirrors.

Preparing a smoke and mirrors trap is a time of joy for goblins, and smashing the necessary mirrors into razor-sharp fragments is the tribe’s highlight of the year, or even decade for truly impoverished tribes.

The next step is attaching the mirror fragments to wooden poles; the poles are balanced to swing down on the hapless targets, burying the mirror fragments deep into flesh. The larger races always wrinkle their noses in disgust when dealing with goblins, and really, the larger races are a sickly bunch, easily overcome by nausea. Goblin trapsmiths noticed this weakness and developed a smoke pot to targeting it; these pots expel great billows of greenish smoke as soon as they are ignited.

With a DC 8 Perception check, a character notices that a foul smell permeates the area near this trap.

The smell can be detected as much as 90 feet from the trap’s location, and the smell masks the stench of nearby goblins. Creatures with the Scent ability can detect the goblins with a DC 25 Survival check.

Smoke Pots: Once triggered, the smoke pot is ignited and swings down upon the targets. Targets can avoid the burning pot with a DC 11 Reflex save. The nauseating smoke is more difficult to avoid; a DC 14 Fortitude save is required in a 20-ft. radius.
Mirror Poles: All targets within a 10 ft. square are attacked by 2d4 mirror tipped poles, and each successful attack deals 1d3/x4 damage. Each hit also forces a DC 8 Will save to avoid becoming shaken, the mirrors clearly show the shock and fear that each hit generates on the targets face.

This concludes our brief survey of goblinoid traps. More tricks, traps, and deadly devices next week!