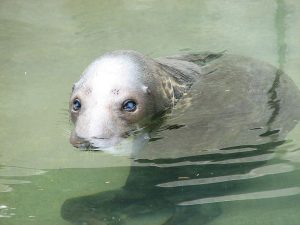 “It’s gonna be a good haul this year!” Morant shouted to his partner as he clubbed another seal to death, blood spilling to the snowy ground below.

“Yeah, they’re plentiful this…” Morant’s partner’s response became a scream as one of the seals unhinged its jaws and then chomped down on the man’s arm, severing it.

Morant stared wide-eyed at the scene and readied his club to smash the creature, which had his partner’s arm dangling out of its saw-toothed mouth. He never laid a blow on it, though, as several dead seals rose up and engulfed him, bringing him down to the ground, and shredding him to pieces while he cried for mercy. The surviving seals scampered about the blood-soaked snow unmindful of the carnage around them…

Once both men breathed their last, the murderous creature took its leave, and the unliving seals trailed behind it, carrying the trappers’ bodies off.

Considered by many druids to be nature’s response to overhunting of fur-bearing animals, a trapper’s bane presents a nasty surprise to those who think they’re dealing with defenseless animals.

A trapper’s bane looks like a typical member of its species, until it launches its attack and reveals an unnaturally hinged jaw and hundreds of sharp teeth.

The creature allows trappers to go about their business to lull them into a false sense of security and to build up an army of dead creatures it can use later. It attacks with surprise to severely wound one of its opponents and activate its frightful presence. The trapper’s bane then animates any dead animals to help attack remaining foes while it calms any living animals in the area. The creature concerns itself only with the destruction of its prey, and it fights to the death.

A trapper’s bane does not naturally exist; instead, it spontaneously appears when a fur-bearing animal is on the brink of extinction. It mimics that species’ appearance and lives only as long as required to drive out or kill those who would exterminate its adopted species.

“Trapper’s bane” is an acquired template that can be added to any fur-bearing animal with 3 HD or less (referred to hereafter as the base animal).

Hit Dice: Change all of the base animal’s HD to d10s and add 7 racial HD to this total.

Speed: All modes increase by 20 ft.

Attacks: Increase the number of dice for the base animal’s bite by 1. All other attacks remain the same.

Innocent Seeming (Ex)—When opponents first encounter a trapper’s bane, they must make Sense Motive checks against the bane’s Bluff check. If the creature’s first attack in the encounter is against an opponent who fails the check, it adds 2d6 sneak attack damage for that attack.

Skills: Gains 7 skill ranks and +4 racial bonus in Bluff, which is considered a class skill.

SPECIAL ABILITIES
Innocent Seeming (Ex) When opponents first encounter a murder fox, they make Sense Motive checks against the fox’s Bluff check. If the creature’s first attack in the encounter is against an opponent who fails the check, it adds 2d6 sneak attack damage for that attack.