Skip to content
Home / Delve into the Depths in the Kobold Blog / Behind the Curtain: Sunken Empires 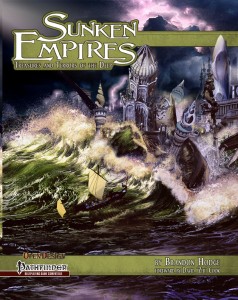 Very soon, I sense there will be some very wet PCs!

Why? Because hot on the heels of the Open Design/Paizo joint project From Shore to Sea is the sourcebook Sunken Empires. Uncover the secrets of Lost Azlant with the first and tailor your own underwater world and characters with the second.

Well, we want to give you an idea of what’s going on behind the scenes at Open Design, so every week, you’ll hear from one of the Kobolds on the progress of a current project. And this week it’s me and Sunken Empires.

Pushing myself to the front of the line, I can proudly proclaim that I have finished edits on Sunken Empires. Brandon Hodge did an amazing job pulling together the patron content and developing it into a cohesive unit. My job was to take it the next step, taking on the role of editor, and it wasn’t all easy…

Because the turnover came in about 20% larger than expected! In a way, that’s good news since it meant that, editorially, I could ensure only the very best material ended up in the book. However, I had the daunting task of deciding what to cut out to make our pagecount goal,  so I snipped and stitched, polished and prodded, readying it for layout.

In the end, I emerged covered in ink and reeking of shame for the unlawful amputation I had to perform. But I dusted myself off and shored up my sensibilities knowing that, because it was so difficult, this must simply be great design. In the end, I didn’t cut material because it wasn’t good enough but,  rather, for SPACE! That means we have some great, extra pieces that you’ll be seeing both in Kobold Quarterly and on this very site.

Now, the sourcebook is in the loving care of the very talented Crystal Frasier, who will be ushering the text through layout.

I sense the sea in your future! But before I go, let’s take a sneak peak at the book…

Underwater adventuring is the canvas for the entire project, and this snippet from the section detailing underwater environments highlights what’s in store:

Sages and scholars assign all manner of academic names to the deep seas, labeling them with obscure names according to depth and temperature, but ask any adventurer, and they’ll say “it gets deep and just goes deeper.” At some point, the differentiation of these zones becomes an academic exercise, but for those facing the terrors this deep below the surface—beyond 700 ft.—there are only 3 of vital note: impenetrable darkness, unforgiving cold, and incredible pressures that can implode magical full plate like a pie tin. Once the last dusky haze of sunlight fades from the level above and adventurers pass the thermocline border into the bitter-cold depths, you are entering the area known to adventurers as the Underdeep.

Many fish thrive in these dark recesses of the sea by making light of their own in the form of bioluminescence. The ocean floor is universally barren, punctuated only by fields of black smokers, whale carcasses and the occasional sick glow of an aboleth stronghold. Out of the reach of the warming rays of the sun, the temperature drops rapidly to near freezing at the lower depths of this zone, and hypothermia is a real risk for unprotected creatures, dealing 1d6 cold damage/minute of exposure. Depth pressure is crushing at this level, dealing 1d6 damage/minute/100 ft. of depth to unprotected creatures. (The GM should rule that adapted aquatic creatures, especially those found on the random encounter table for this depth, are immune to this damage, and for others, Chapter 2 includes the Depth Affinity feat for those creatures that you need to appear at this level.)

Near the twin cities of Cassadega, the continental shelf plunges deeply only a short boat ride from shore, about 5 miles from the coast on a jagged ledge known to local as “the Brink.” Here, the water drops from an average depth of 200 ft. to a staggering 10,000 ft. Powerful magics are needed to explore these depths, which include the final remnants of Ankeshel, now dominated by aboleths and their deep-dwelling slaves…

Ancient cultures also play a large role in the book, and this short piece details one of the many bits of lost technology that might be found:

Cryothermic Pacifier: This complicated firearm is manufactured from a curious mix of cobalt and copper and feels cold to the touch. Used primarily for crowd control, the funnel-shaped barrel discharges a 20-ft. cone of freezing air that drains vitality from those in its path (Reflex DC 12 halves). The freezing vapor may be fired 1/round as a standard action that drains 4 charges from a connected vril battery, and the weapon requires a full vril water container. A single pint of vril water produces 4 shots from the weapon, and the jars may be replaced as a full round action.

12 thoughts on “Behind the Curtain: Sunken Empires”