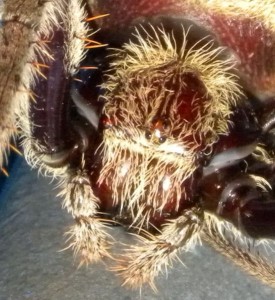 The creature scampers down its web toward you, far more nimble than a thing the size of a cow has any right to be. As it moves, however, it becomes clear that this isn’t a spider—spiders don’t have venom-dripping stingers on their back.

Duergar bear responsibility for the creation of this ill-tempered amalgam. More specifically, a single duergar—a mad alchemist whose name is lost to time—set about creating a new tunnel guardian. He struck upon the idea of fusing a monstrous spider with the stinger of a giant scorpion. He fully expected the creature to remain mindless although he prayed to his dark gods to grant the abomination slight intelligence, making it all the better to train. Annoyed by his incessant prayers, the gods granted his wish, making the skittering just intelligent enough to be cunning and dangerous. His creation an abject failure, the alchemist up and left…

The skittering thrived, however, spawning incessantly. Now, ironically, the creature that was designed to be a guardian for the duergar stalks their every move through the darkness, seeking to feed its near-insatiable appetite on the tender flesh of the dark dwarves. Of course, the flesh of other creatures also serves their needs although nothing is quite as delectable to a skittering as a duergar.

Roughly the size of a cow, an adult skittering weighs roughly 500 lb.—much of its large size is accounted for by its extremely long legs. A skittering resembles a Large monstrous spider in all ways save for one feature—its deadly tail. Originally procured from a gigantic scorpion, the skittering’s tail is amazingly flexible, able to lash out in any direction the skittering chooses, often striking foes up to fifteen feet away.

Over the centuries, skittering have developed a taste for humanoid flesh, particularly that of their progenitor race. Despite the preference, though, skittering are equal opportunity hunters and make meals from whatever stumbles into their webs. They use their massive mandibles to crush the bones of prey, swallowing large chunks of flesh at a time.

Skittering procreate in the same manner as normal spiders with the female laying eggs. Upon hatching, the young skittering must quickly learn to fend for themselves. It’s not uncommon for a dominant youngling to kill and devour its siblings shortly after hatching.

Skittering are ill-tempered creatures and prefer to spend most of their time hunting alone. On rare occasions, a traveler has the misfortune to stumble upon the nest of a mating pair. The traveler’s best hope for survival in this instance is for the pair to fight among themselves to determine who will get the meal.

An even rarer event—thankfully—occurs when a skittering of superior intellect is born. Such a creature possesses the evil cunning to draw several skittering together, called a colony by those who speak of such things. This advanced leader works hard to control the colony, keeping personalities in order and tempers in check, all with the goal of raiding small outposts of humanoids—drow, duergar, and svirfneblin are all equal targets. The destruction wrought by a raiding colony is a sight to behold—from a safe distance, of course.