Skip to content
Home / Delve into the Depths in the Kobold Blog / Streets of Zobeck: It Would Be a Shame If Yous Were to Miss Out on this here Opportunity, You Unnerstand Me?

We’ve nearly hit the greenlight for Streets of Zobeck!

What does this mean?

It means this might be your last chance to get in before the price goes up and the brainstorming starts in earnest. That’s right, our brainstorming has been pretty light up until now. We’ve limited ourselves to a few preview items and practice pitches in an attempt to keep the big cut for the big crowd.

So what can you look forward to?

As a patron, you’ll be able to participate in the brainstorming and review, as well as playtesting, and there will be a lot of all of those things because…

We’ll be doing a lot of rounds of pitching material: 1–2 rounds of spells and items, 2–3 rounds of NPCs, 1–2 rounds of urban locations, and then 3 rounds of adventure pitches. Yeah, you read that right. This project will have at least seven opportunities for a senior patron, major donor, or sponsor to contribute their material and get feedback from the patrons, who include 2010 RPG Superstar finalist Jim Groves and Aruneus designer Ben Gerber (Troll in the Corner), and let’s not forget Wolfgang Baur and Richard Pett. It’s a great opportunity to sharpen your designer chops and help make a fantastic project even better through your involvement.

So what sorts of things can you look forward to? How about feats like these, spun up by senior patron, Chad Middleton (aka Doomedpaladin)… 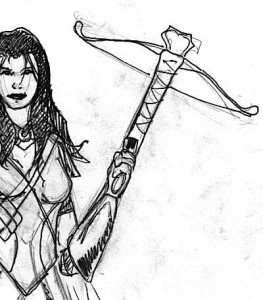 De Boss would likes a word wit you.

Benefit: You may wake anyone rendered unconscious by nonlethal damage, adjusting their accumulated nonlethal damage total to equal 1 hp less than their current hp. Those awoken in this way gain the benefits of the Alertness feat for 1 minute but are shaken afterward for a number of minutes equal to their Constitution modifier (minimum 1).

He don’t look so tough to me.

Benefit: You may choose to deal 1d3 ability damage (1/day) to the ability score of your choice to an opponent if you render it unconscious with nonlethal damage twice within a 24 hour period.

Additionally, you gain a +2 morale bonus to Bluff and Intimidate checks and a −2 penalty to Diplomacy checks against the opponent until the ability damage has healed. These bonuses stack with those provided by Diplomatic Strike.

Hey! I’m talkin’ here!
Benefit: You do not suffer penalties to hit when using a weapon that deals lethal damage to deal non-lethal damage instead.

Additionally, you gain a +2 morale bonus to Bluff and Intimidate checks and a −2 penalty to Diplomacy checks against any opponent rendered unconscious by nonlethal damage dealt by you within the last 24 hours.

Become a patron of Streets of Zobeck today. Or else.

8 thoughts on “Streets of Zobeck: It Would Be a Shame If Yous Were to Miss Out on this here Opportunity, You Unnerstand Me?”