Skip to content
Home / Delve into the Depths in the Kobold Blog / The Sorcery Stop: Slime (Is On Your Side) 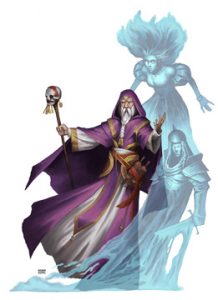 Slime (Is On Your Side)

An aspect of classic fantasy (and magic) that is oddly underrepresented in the current rules is true summoning. On the one hand, it makes sense since more creatures participating in any aspect of an adventure grossly complicates the job of the player and the GM. On the other hand, it would be nice to have more summoning options. While adding more complexity to a combat scenario is unlikely to make anyone’s life easier, there are ways to make a character feel a little bit more like a summoner just by reskinning some existing spells. Almost any spell can be re-flavored to involve summoning a creature, whether that creature is used to attack, carry a message, or even move the caster around.

Perhaps the simplest demonstration is with fire spells. As written, virtually all fire spells follow the same framework: you cast the spell, your target is enveloped in flames and is burned to a greater or lesser degree, depending on how their saving throw went. But as with so much, when it comes to atmosphere, simply changing the description of the spell can make it feel completely different.

What if these spells didn’t conjure fire but summoned a creature of elemental fire? When you cast fire bolt, for example, you summon an elemental fire creature that immediately attacks one creature of your choosing within the spell’s range and then returns to its plane of origin. The spell’s mechanics remain unchanged, but the atmosphere of the spell shifts dramatically.

You can accomplish much the same with most spells: move earth, for example, summons a creature of elemental earth that reconstructs the terrain at your command while reverse gravity summons a legion of air creatures to push items and foes upward. Find the path summons a tracker, and sending literally brings a courier to relay your message. With a little imagination, it’s easy to rework the description of almost any spell to describe summoning a creature and having it do your bidding. Best of all, since there are no changes to the mechanics of the spells, the game effects of this approach are purely cosmetic. If you implement this tactic, a character with the Elemental Adept feat becomes a master summoner able to conjure more powerful allies!

Another option to add a summoning feel to the spell list is to consider non-creature aspects of the game. The rules on dungeon hazards and wilderness hazards provide some tantalizing options: conjuring razorvine to block off a hallway or summoning quicksand to fill a pool or even an interior room. You could also reskin grease as slippery ice, so instead of making a floor slick with oily goo, it becomes slick with dangerous ice. We can work back to an appropriate spell level by looking at the damage each hazard type inflicts and weighing it against the Spell Damage table.

If you decide to use such spells in your campaign, you could rule that these strange dungeon dressings originated from the spells. You could also rule that the hazards came first and that the spells represent powerful magi learning to harness their power. Here are a couple of example spells in this vein.

You summon a 5-foot square patch of green slime, which appears anywhere within range. A creature that comes into contact with green slime must succeed on a Dexterity saving throw or take 5 (1d10) acid damage. A creature that fails its save takes the damage again at the start of each of its turns until it uses an action to scrape off or destroy the green slime. Against wood or metal, the green slime deals 11 (2d10) acid damage each round, and any nonmagical wood or metal weapon or tool used to scrape off the slime is effectively destroyed.

At Higher Levels. When you cast this spell using a spell slot of 2nd level or higher, you summon an additional 5-foot square patch of green slime for each spell slot above 1st. The patches may be adjacent but cannot overlap.

You conjure a patch of brown mold, which sucks the warmth out of anything around it. Choose a 10-foot square within range. The mold covers that square, and the area within 30 feet of that spot is extreme cold.

When a creature comes within 5 feet of the mold for the first time on a turn or starts its turn there, it must make a Constitution saving throw, taking 22 (4d10) cold damage on a failed save or half as much damage on a successful one. If a source of fire is brought within 5 feet of the old, it immediately expands in the direction of the fire, covering a 10-foot-square area (with the source of the fire at the center of that area).

Any effect that causes cold damage destroys the mold immediately.