Skip to content
Home / Delve into the Depths in the Kobold Blog / Races of Midgard: Aridni 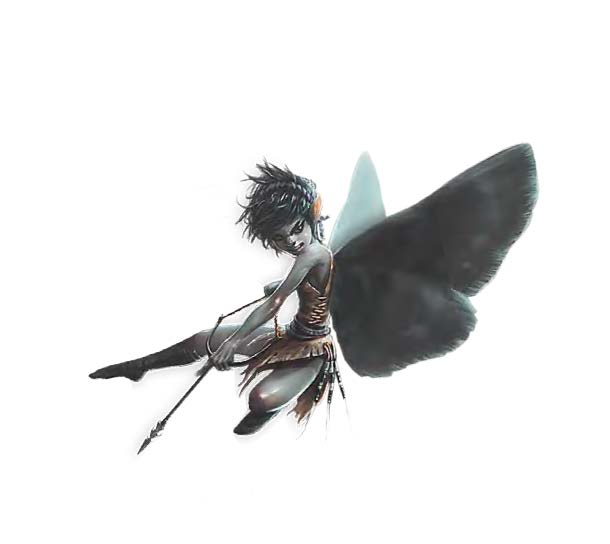 Those that call Midgard home are many and varied, and adventure awaits them all. This series presents some potential player races that you might not have considered.

Description: Aridni are small, ashen-grey creatures, standing no more than three feet in height. They have thin, agile bodies and weigh no more than thirty pounds. And of course, they have moth-like wings, allowing for quick maneuvering to avoid danger and escape foes.

Origin Story: Long ago, the aridni were brought to the mortal world with their masters from the Elflands. Much later, when their masters returned to their homeworld, many aridni were abandoned or chose to stay behind. Regardless of why, they were now on their own in the mortal world and had to find a way to adapt. Many sought refuge with wizards, becoming their servants, while others found a new life discovering new passions. Many aridni, though, returned to their old habits—raiding, thieving, and sneaking about “acquiring” items of wealth, especially from humans and dwarves.

Social Distrust: Aridni have a hard time trusting other races. They tend to sneer and jest during social interactions, especially with humans and dwarves. Their distrust of these races stems from the elves’ struggles with them in the past, and it’s not easily shed, but some Aridni have embraced others and now thrive in their new home and pass on their excitement to their kin. There’s a new generation coming that can more fully appreciate such a world full of wonder.

Age: You reach maturity by the age of 60. Your average life span is expected to be around 250–300 years. However, some aridni have been known to live longer due to their magical nature.

Alignment: Your people have been around for centuries, fostering a mischievous and chaotic nature that still persists. You have come to enjoy your freedom in this new world and will do anything to protect it. Your desire to be free has led you to seek a life of adventure, fortune, and glory. Though you might still hold deep resentment toward others, due to your past, you might instead view those old grudges as unnecessary and choose a life full of new friendships.

Languages: You can speak, read, and write in Common, Sylvan.

Size: You are 2–3 feet tall and weigh no more than 30 pounds. Your size is small.

Speed: You have a walking speed of 20 feet.

Tradecraft: You are a small fey and learned early on how to utilize your size and speed to your advantage as well as how to use your ability to manipulate others when the need arises. You are proficient in Stealth and Deception.

“One’s origin does not determine their journey.”—Stril the Quick

Airborne:You were born with wings, and your fly speed is 40 feet while wearing no armor or light armor only.

Blood of Your Ancestors: You are a magical creature, and your fey blood gives you special innate abilities. Over time, you learn new spells, which only add to your mischievous nature. You have innate spellcasting ability, and these spells are in addition to any other spells offered by your class and does not count toward your maximum known spells. Charisma is your spell casting ability for the following spells.

Combat Preference: You are a small creature and prefer not to engage in melee unless forced. You are proficient with dagger and shortbow.

Flight of the Aridni: Once per short rest, you may use your reaction to impose disadvantage on an opportunity attack against you this turn.

Quick Witted: You have advantage on Intelligence and Charisma saving throws against magic.

14 thoughts on “Races of Midgard: Aridni”