Skip to content
Home / Delve into the Depths in the Kobold Blog / The Imajaghan: Blue Turban Paladins of the Desert 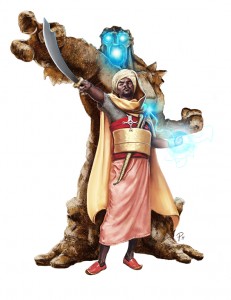 Wearing indigo-colored cheche, a garment that is both veil and turban, and flowing white robes, the Tamasheq of the Crescent and Sarklan Deserts are a simple tribal people journeying endlessly from oasis to oasis while tending their herds of goats, camels, and horses. Or at least that’s what they want others to believe.

The truth, however, is that the Tamasheq have a thriving civilization that they take great pains to hide from the world. For in the Stone Desert lies the Dominion of the Wind Lords. In that inhospitable world of rocky badlands, aspects of nature and even inanimate objects have an incarnate or spirit presiding over them. These spirits are aware and conscious like any living thing and they all pay homage to the primordial beings known as the Wind Lords.

Guarding and being guarded in return, the Tamasheq tribes worship these spirits as gods through the Spider Prophet and the Sahirs (or spirit talkers). In a land where the rocks, sand, fire, or even slightest breeze speaks and moves, it is not surprising that some tamasheq feel a deeper connection to this world of living spirits. But do not think the Stone Desert is some idyllic nature wonderland. Not all is well in the Dominion. A secret civil war has erupted between three of the ancient Wind Lords and their exiled brother Boreas. This conflict has divided the tribes, pitting family against family, spirit against spirit.

While the civil war plays out among the stones, the Spider Prophet and his soldiers work to keep the conflict a secret, fearing an invasion of flights of dragons when the Dominion is at its most divided. The Spider Prophet’s elite agents are the Imajaghan. Charged with confronting external threats to the Dominion as well as rogue spirits within their own borders, these specialized paladins can raise whole squads of elementals to lead into battle. Very few warriors have the dedication and connection to become Imajaghan.

We were inspired to create the Imajaghan after seeing images of the tuareg riders of North Africa, who wore blue turbans. They looked noble and fierce and completely in tune with their environment. Once we created the Dominion, we realized that they needed their own special kind of paladin. Thus, the Imajaghan was born!

At its heart, the Imajaghan are a paladin archetype with two major changes. The first is they sacrifice some of the base class’s more iconic abilities, like channeling energy, for the power to cast summon monster spells as a standard action. The creatures that the Imajaghan can call forth are elementals.

The second ability is my favorite. Instead of getting the divine bond ability to summon their mount or weapon, the Imajaghan receive an elemental companion. Now who wants an elemental buddy? I know I do. I’m going to name mine Wolfgang!

As we near the end of the Kickstarter, we hope to see more elements of the project unlocked, of course, but we’re very excited at what we have all accomplished—with the help of the backers—so far. If you haven’t already kicked in, please take a look at the entirety of the expanded offerings in this project and consider doing so now! For those who have already backed this project: Thank you all very much for getting us this far!

1 thought on “The Imajaghan: Blue Turban Paladins of the Desert”