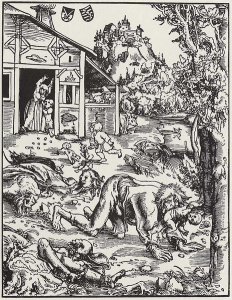 You may already own Kobold Quarterly #11, but you’re not done getting additional content for it! Today, to accompany his “Howling Werebeasts” article on lycanthropes, the inestimable John Ling presents a brand-new prestige class. Werewolves, your days are numbered, for the hunter of the cursed is on your trail!

Gald moved through the underbrush silently. He had tracked the beast for days, and he knew he was nearing its lair. The beast had proven to be quite clever, and had eluded capture for months, and that’s why he was here. People only summoned him to handle the most difficult of beasts.

Gald edged forward and spotted a patch of fur clinging to a bramble bush. Yep, this was definitely the right path. He paused to ensure he was still up-wind; it would do no good to sneak up on the beast if it smelled him coming.

Ahead, Gald spotted a clearing. Quietly, he drew his longsword and dagger—both alchemically silvered. All the better for bringing the beast down quickly. He crept up, careful not to make any noise, and peered through the underbrush.

And there stood the beast.

It was in hybrid form—an amalgam of human and boar features—and it wasn’t alone. Tied to a pole in the middle of the clearing was the missing daughter of Lord Chrin.

Gald watched carefully, waiting for the right moment when the beast was looking elsewhere.

Then he sprang into action. Gald charged at the beast. His sword sunk deep into the beast’s chest, eliciting a sickening howl from the creature. Gald smirked as the beast’s shape twisted and transmuted before him. In a matter of seconds, the beast was no more than a man.

“Your rampage has gone on long enough!” Gald declared, as he stood over the bleeding man. “I am here to end your reign of terror.”

The creature smirked back. “Ah, you must be the infamous Gald. Word of you travels fast among my kind. Tell me, Gald, what would you do with her after you have killed me?”

Gald looked at the beast with a puzzled expression. “Take her home, of course. Then collect my reward money.”

The creature laughed. “Think again, you foolish hunter! She’s one of us now! I may not live to see the next moon, but she is my child now, and through her, my blood shall continue!”

The scowl on the beast’s face quickly turned to a look of fear as Gald’s sword and dagger both came arcing down at it. And just that quickly, it was done; the beast was no more. “Hold still for a moment,” Gald said to the Lady.“I think I can cure you before you do any harm.”

Hunters of the cursed are skilled at locating and destroying lycanthropes, utilizing many and varied techniques to accomplish their task.

People become hunters of the cursed for varying reasons, but all share a common trait: the shapeshifting monsters themselves once bit the future hunters, and the horror of that time has stayed with them. Regardless of their reasons for entering the class, all share the goal of eradicating all lycanthropes.

Hunters are usually willing to work within groups, either with other hunters or with less skilled warriors. In fact, a good hunter realizes that members of other classes offer skills and abilities that will aid in the tasks ahead.

Special Must have been bitten by a lycanthrope

All of the following are class features of the hunter of the cursed prestige class.

Weapon and Armor Proficiency You gain no proficiency with any weapon or armor.

Master Hunter (Ex) As a hunter of the cursed, you have spent many long hours honing your skills in finding and destroying lycanthropes. At first level, you gain a +2 bonus on Bluff, Listen, Sense Motive, Spot, and Survival checks when using these skills against lycanthropes. Likewise, you get a +2 bonus on weapon damage rolls against such creatures. At 6th level, this bonus increases to +4. If lycanthropes are your favored enemy (from the ranger class feature or a similar ability), these bonuses stack. In addition, if you have a favored enemy (or similar ability) for the base creature, these bonuses stack. For example, if a 6th level ranger/1st level hunter of the cursed has humans as one of his favored enemies, he would apply both his ranger favored enemy bonuses and his hunter of the cursed bonuses against humans afflicted with lycanthropy.

Precision Strike (Ex) You are skilled at hitting lycanthropes where it hurts most. This ability is exactly like a rogue’s sneak attack, except it only applies to lycanthropes. If you have sneak attack damage from another source, the two abilities stack.

Hard Hitter (Ex) You have had plenty of practice wielding alchemical silver weapons. Whenever you strike with an alchemically silvered weapon, the weapon’s damage is not reduced by one (as is normal for silvered weapons).

Resist the Curse (Ex) You are exposed to lycanthropy more than is healthy. Beginning at 3rd level, you gain a natural resistance to the disease. This bonus is +2 at third level and increases by 2 every 3 levels. This bonus only applies to Fortitude saves to resist contracting lycanthropy.

Smite Lycanthrope (Su) Once per day, you may attempt to smite a lycanthrope with one normal melee attack. You add your Charisma bonus (if any) to your attack roll and deal 1 extra damage per hunter of the cursed level. If you accidentally smite a creature that is not a lycanthrope, the smite has no effect, but the ability is still used up for that day.

At 8th level, you may smite lycanthropes one additional time per day.

Cure the Curse (Sp) Once per day beginning at 7th level, you may cast remove disease as a spell-like ability. This ability is limited, however, to only being able to remove lycanthropy. You are considered a 12th level cleric when using this ability. Any attempt to cure an individual must occur within the first 3 days of infection.

Force Form (Su) At 10th level, you have achieved the pinnacle of your career and are feared by lycanthropes for your ability to control their form. During any melee attack, you can force a lycanthrope to resume the form of its base creature. The lycanthrope is entitled to a fortitude save, with a DC equal to 10 + your class level + your Charisma modifier.

Master Hunter At every 5 levels after 10th level, your master hunter bonuses increase by +2.

Precision Strike At 11th level and every 3 levels after, your precision strike improves by 1d6.

Resist the Curse At 12th level and every 3 levels after, your resist the curse bonus increases by +2.

Smite Lycanthrope At 12th level and every 4 levels after, you gain another smite lycanthrope use per day.

Cure the Curse At 14th level and every 7 levels after, you gain another use of cure the curse per day.

Bonus Feats At 13th level and every 4 levels after, you gain a bonus epic feat, selected from the list of epic hunter of the cursed feats.

Hunting season is on! You werecreatures best beware… especially you wereturkeys out there. Your days are most definitely numbered. (So grab your own Kobld Quarterly #11 today!) All lycanthropes must register their identities below.

2 thoughts on “The Hunter of the Cursed”