Skip to content
Home / Delve into the Depths in the Kobold Blog / Boarticulture: Brutes of the Swine (Part 2 of 3) 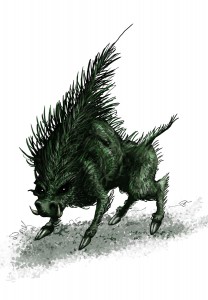 The typical “adult” form of these creatures, the porky pine bears a resemblance to a small coniferous tree. Wide needle-like growths along its sides and on its back give it a conical appearance. They typically form small family units of three to six members and several young hedge hogs. A porky pine is quick to attack intruders and rarely backs down from a fight, a quality that makes them desirable as attack beasts for fey creatures or others with strong ties to nature…

Forest Camouflage
When in terrain that is mostly trees, underbrush, plants, or natural growth, the porky pine gains a +5 bonus on Stealth checks and can hide with any cover or concealment.

A porky pine often begins combat by charging one or more foes. When unable to charge, they often gather together in small clusters to take advantage of their needle coat. In bright light, they take full advantage of their light step to move away from foes and charge without provoking opportunity attacks.

4 thoughts on “Boarticulture: Brutes of the Swine (Part 2 of 3)”