Skip to content
Home / Delve into the Depths in the Kobold Blog / Book Review: Kindred and Wings 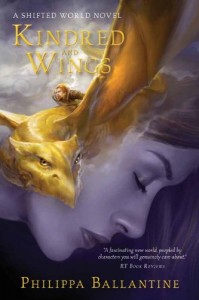 On the back of the dragon Wahirangi, Finn the Fox flees the world he has known. As he sets out to find the brother he never knew existed, he still holds in his heart the memory of the Hunter. He has denied his love for her, but he cannot deny it forever. In the halls of the Last Believers, Talyn begins to uncover her own mysteries, but her lust for the death of the Caisah is still strong and clouds her vision. She must choose her path, as the Seer of her people or as the assassin of the overlord. Meanwhile, Byre, Talyn’s brother, must venture into the fiery world of the Kindred, to rebuild the pact that his ancestors made. He will risk everything he is as he forms a new pact that will change his people forever. Dragons and myths will be reborn, as the Hunter and her Fox face each other once more.

Kindred and Wings picks up right where Hunter and Fox left off. I finished that book with a great desire to find out what had happened to the realistic and fantastic characters that Philippa Ballantine had crafted. My desires were satisfied—I got to know some characters I never thought I’d get to know, and the story and action moved at a breakneck pace that had me on the edge of my seat. I was on the verge of a flaming wreck, but Ms. Ballantine kept me on rails. I do not often have these feelings when reading a book, which is the mark of an exquisite wordsmith.

This book, much like the last, was a juggling act of mammoth proportions. Several character storylines had to be moved and paced in such a way that the reader remained interested and was still able to follow the overarching plotline. Because of the foundation in the Hunter and Fox, Kindred and Wings was a breeze to follow. The actual title of the book was accurate and maintained the ____ and ____ format established with the first book, but it still sounds a little awkward when said aloud.

This book propelled the story of the Shifted World forward. The fact that Ms. Ballantine refers to it as the Shifted World, not the Shifting World, interested me; as crazy as it is to think of a world where a lake will shift into a set of impassable peaks within days or weeks is difficult enough to deal with. Now if you look at the history of the world as it was and is presented, the shifts that it has felt are even greater than mountains disappearing overnight. Heavy, bro, heavy.

Ballantine still keeps her characters and her readers guessing until the end on some of the aspects of this story. I have always enjoyed being able to guess or piece together a few things in a book, but still getting hit with unexpected twists and turns, and Ballantine brings the heat on both accounts. At the end of this book, several things happened that were not in the least bit expected. Additionally, even those telegraphed results were seldom if ever achieved in the manner in which one might have been expected.

Kindred and Wings, like its predecessor Hunter and Fox, is a breath of fresh air in the fantasy genre. Ballantine has harnessed a unique and special magic with the Shifted World series; she has seamlessly incorporated some of the myths and legends that she grew up with in New Zealand into what is a normally a Eurocentric genre. I hope her reputation as the quality author that she is gets this series the recognition and readership it deserves. If you are looking for a new take on what can become a very predictable and cookie-cutter genre, then the Shifted World novels are for you. Philippa Ballantine writes from the heart and her writing will speak to your heart.