Skip to content
Home / Delve into the Depths in the Kobold Blog / Templates: Fire, Frost, and Fang (Part 1 of 3) 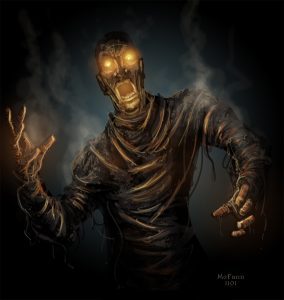 When a fire creature of the elemental realms dies, particularly through necrotic forces, it is rumored that sometimes a tiny portion of its life force survives. If this life force makes its way into another being, the result is a soul-burned creature. These creatures appear normal until agitated or injured, at which time their eyes begin to glow and thin trails of ashy smoke issue from their bodies…

This template can be applied to any creature. It represents a creature permeated with a supernatural flame from the elemental realms.

TRAITS
Combat Advantage • Fire
The soul-burned creature deals and extra 1d6 fire damage on attacks against any target it has combat advantage against.

If possible, a soul burned creature uses blinding burst before its normal attacks, targeting blinded enemies in following rounds. Because of the soul-burned creature’s feed the flames power, it is especially dangerous in conjunction with fire hazards and allies that use burst or blast fire attacks.