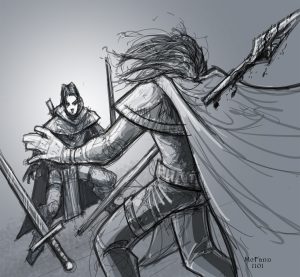 “He would not fail.” With a last glance toward the gathered clan, Bronn strode into the cave that held his last test, the test that would make him a warrior. “He would not fail.” The thought distracted him enough that the apparition startled him as it came into being. Scolding himself, Bronn assumed a low guard and saw that he faced his own reflection. His reflection had a determined look before suddenly jerking wildly: Bronn saw himself pierced by a spear. Stepping back, Bronn warily watched the apparition fade.

Bronn pressed on. The cavern widened and he saw a carefully constructed corridor. Ancient glyphs warned against pressing on. “I will not fail,” Bronn boldly strode down the corridor. The spear caught him high in the chest. Bronn was dead before he reached the ground…

The clan was preparing to leave. Doran strode to the lone hillock where Jerun, Bronn’s father, stood with shoulders slumped, leaning heavily on his spear.

“You told him there was no shame in failure?” asked Doran.

As soon as the trap detects an intruder (Perception +20), it manifests a shadowy double of the intruder. The apparition shows the intruder’s death, and the effects of this shocking experience are handled by the color spray spell (Will DC 13 negates). A second Will save (DC 13) is required to shake off the morbid fascination of seeing one’s own death.

Using the Fatal Future Trap in Your Campaign