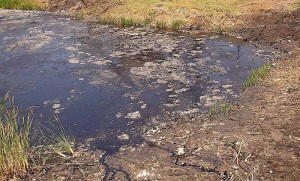 The hulking black creature, ever so vaguely humanoid in shape, rises from the tar pit. Its small eyes glow red, its body covered with all manner of items—tree limbs, leaves, carcasses of small animals, and even a few weapons.

The incorrectly named tar fiend—for it is an elemental, not a fiend—lives in tar pits. It forms whenever a large amount of magical energy is unleashed within the tar pit it calls home. This energy could come from the death a magical being, such as a dragon, or even through a spellcaster unleashing a large amount of spell energy upon the area in a very short period of time…

TACTICS
Before Combat A tar fiend makes no pre-combat preparations. It is content to reside in its pit.

During Combat Tar fiends fight to the death as long as any creature remains within 50 ft. of its home. It focuses on one foe, opting to apply its Dodge bonus to the creature it attacks.

Morale Tar fiends are territorial and fight fiercely to protect themselves and their tar pits. They never flee from combat but rarely pursue adversaries.

SPECIAL ABILITIES
Improved Grab (Ex) If a tar fiend hits with one of its slam attacks, it deals normal damage and can attempt to start a grapple as a free action that does not provoke an attack of opportunity. If the tar fiend wins the grapple check, its target is stuck to the tar fiend and begins to suffer from the suffocation ability on the following round. Tar fiends receive a +4 racial bonus on grapple checks.

Sticky Body (Ex) Whenever a melee weapon (including natural weapons) strikes the tar fiend, the attacker loses all its additional attacks for rest of the round (Strength DC 21; Strength-based). If the attacker wields a manufactured weapon, it can opt to let go, or it can hang on (Strength DC 21 on the tar fiend’s turn; Strength-based), attempting to break free next round.

Suffocation (Ex) A grappled target runs the risk of suffocating because its head becomes encased in tar. It can take no actions other than attempting to break free from the tar fiend. The grappled creature must hold its breath while doing so for a number of rounds equal to 1/2 its Constitution score. After that time, it must make a DC 10 Constitution check to continue holding its breath, with the DC increasing by 1 each round. On a failed check, it begins to drown.

Tar Globule (Ex) A tar fiend is able to hurl a piece of itself as a ranged attack 1/round. The globule has a range increment of 20 ft. and inflicts 1d8 damage as a thrown weapon.

A typical tar fiend stands roughly 10 ft. tall and weighs about 2 tons. Its body is a black mass, often covered with detritus such as sticks, leaves, and discarded weapons. Its eyes glow a burning red.

Tar fiends are rare creatures that come into existence when a large expenditure of magical energy mingles with an existing tar pit. The creature has no need to eat, nor does it collect treasure although the remains of past victims often collect along the edges of its pit.

A tar fiend is content to swim and frolic within its home pit. It attacks any other creature that comes within 50 ft. of its pit and fights to the death to protect its home. Very rarely, a single tar pit of sufficient size will spawn two creatures. While the uneducated often think of this pair as mates, they share a relationship more akin to siblings.