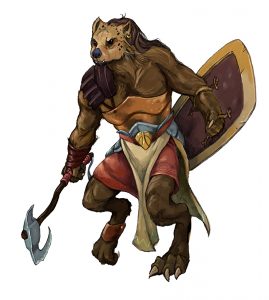 In today’s look at the Southlands Kickstarter, Jeff Lee introduces himself and provides you with a peek at what you can expect from the demon cults. Prepare for real-world inspiration mixed in with pulp and more!

Hello, folks, I’m Jeff Lee. I’m one of the new kids on the block, relatively speaking, when it comes to freelance writing. As a gamer, though, I’ve got over three decades of experience, going all the way back to the “blue box” edition of Basic D&D. Shortly after placing as a finalist in the Monarch of the Monsters contest, Wolfgang approached me with an offer to do a series of short pieces, highlighting various cults set in the south of Midgard. He gave me a few to do and asked me to brainstorm other ideas. I did just that, and he gave me a list of the ones he liked to add to the original list. Among these are three that have been unlocked as stretch goals in the Southlands Kickstarter: the Emerald Order, the Hand of Nakresh, and the Servants of the White Ape. I’m going to share a little bit about these pieces and the process that went into bringing them to fruition.

I’m a bit of a neophyte when it comes to the Midgard campaign setting. When I get projects from Wolfgang, I immediately start reading up on the relevant areas. Thankfully, the Emerald Order got to start from a seed already germinating. Wolfgang asked me to do a cult based on the Emerald Tablets of Thoth, which was a subject I’d already done some research on—a tangent I procrastinated with while doing a bit of reading on Jung. Some of the best writing inspiration comes from the real world, and this is no exception. The Emerald Tablets of Thoth are supposedly a compilation of writings, inscribed on green crystal tablets, which were written by Thoth, a survivor of the cataclysm that sank Atlantis (and presumably the same being worshiped as a god in ancient Egypt). They supposedly hold the secrets of the universe and alchemical secrets that attracted such notables as Roger Bacon, Aleister Crowley, and Isaac Newton, who all wrote translations of the work. The original tablets were supposedly sealed away in the Great Pyramid in Egypt by an order of mystics. How’s that for inspiration?

So I wrote about an order of academics and arcane masters who jealously guarded the tablets and their secrets, dispersing the knowledge only among the worthy—members of their own order—and ruthlessly eliminating any who would seek to possess the knowledge. Oh, and they also believe that only the Order, with its superior knowledge, should rule the world. The cult comes with its own prestige class, as well as its own guardian golems.

The Hand of Nakresh does not seek to rule the world. They will, however, steal anything and everything they can to glorify their eight-armed demon-ape master. For this piece, I decided that I was tired of human NPCs, so the five leaders of the cult are all nonhuman—a tengu, a derro, a kobold, a gnoll, and a roachling are the criminal masterminds that direct the larcenous activity of the cult, each seeking to outdo the others to win enough prestige to become the Exalted, the leader of the five, until the next contest to determine the new Exalted. Think the Legion of Doom in Midgard, and you’re on the right mental wavelength for this one. Their schemes are complex and grandiose, up to and including attempting to steal the power of magic itself. In addition to write-ups of the five cult leaders, this piece features new spells, magic items, and a major artifact. Also, what cadre of super-villains would be complete without a dastardly new vehicle to drive into combat against their foes?

Finally, there’s the Servants of the White Ape. This one screamed pulp adventures—ancient ruined cities in the deep jungle, intelligent white ape guardians, a lost temple to a great demon—and that’s a good thing. However, the English major in me can’t think jungle without thinking of Heart of Darkness, including Coppola’s Apocalypse Now, so there’s definitely some of that in there too. Along with the new head of the revived cult and his monstrous minion, the Great White Ape, there are the white apes themselves—awakened dire apes that have passed their intellect to their offspring over the generations—and the terrible disease they carry that is bane to all spellcasters.

It’s my sincere hope that these offerings will provide new episodes of fun at your gaming table. Should you ever run into me at a convention, I’ll be pleased to hear all about any sessions where this material was used (especially if you’re buying the next round).