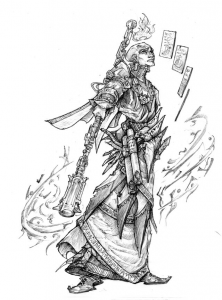 Adventuring underwater opens up new maneuvers that you can perform during combat in place of standard attacks, spellcasting, and other class abilities. Some of these special attacks can be made as part of another action (such as an attack) or as an attack of opportunity…

If you have grappled a creature that is holding its breath underwater, you can attempt to drown it. As part of the standard action spent to maintain the grapple, you can squeeze the air from your opponent’s lungs with a successful combat maneuver check with a -4 penalty. If successful, you subtract a number of rounds of your opponent’s held breath equal to your Strength modifier. You may only asphyxiate an opponent who is the same size category or smaller than you.

Creatures with a swim speed may perform a breaching charge as part of a charge action that begins underwater. When performing a breaching charge, the charging creature breaks the surface of the water and moves 1/2 the distance through the air that it moved while charging underwater, assuming it still has the movement left to do so. The creature’s move ends when this distance is reached. If the creature ends its movement in the air, it immediately falls back into the water or onto any solid surface directly beneath it.

You can perform a kickback as a standard action if you are underwater. If you do not have the Improved Unarmed Strike feat, or similar ability, initiating a kickback provokes an attack of opportunity from the target of the maneuver. On a successful combat maneuver check, you strike the target with both your feet and push the target backward as if you had performed a bull rush.

You cannot move with the target. Instead, you move away from the target in the opposite direction an equal amount of distance you pushed the target, assuming you have the movement available to do so. If the target is greater than 1 size category larger than you, it does not move when you successfully perform a kickback, but you can still move 5 ft. + an additional 5 ft. for every 5 by which your attack exceeds your opponent’s CMD. Neither your movement nor the target’s movement provokes an attack of opportunity.

Share breath lets you help an ally who is running out of air or drowning. As a move action, you grant an adjacent ally an additional number of rounds equal to your Constitution modifier (minimum 1). However, you lose an equal number of rounds from the total number of rounds you can hold your breath. A drowning ally stops drowning and gains additional rounds of held breath as detailed above. If you are drowning, you cannot assist an ally in this manner.

If your opponent is swimming and not standing on a solid surface, such as the sea bed, as a standard action you can knock your opponent upside down or spin them around in the water. You can only spin or flip an opponent who is no more than 1 size category larger than you. If you do not have Improved Grapple, grab, or a similar ability, attempting this maneuver provokes an attack of opportunity from the target of the maneuver. If successful, you gain a +2 bonus to all attacks you make against the opponent until they take a move action to right their position, provoking an attack of opportunity.

A creature with a swim speed can perform a turbulent charge while in the water. As part of the charge action, Large or greater creatures make a combat maneuver check against every creature in a square adjacent to the path of the charge. (For every size category greater than Large, it affects an additional 1 square outward.) A successful check means the target suffers a -2 penalty on attack rolls, damage rolls, and to AC for 1 round for every size category it is smaller. Medium and smaller creatures can only affect the squares they pass through with turbulent charge.