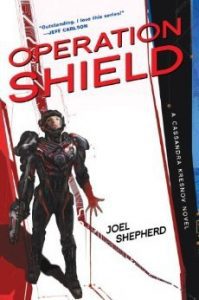 Cassandra Kresnov is not human. She is a synthetic—a manufactured being that has been designed for violent action. Operation Shield opens with a fight on the planet of Droze, a hive of scum and villainy. It seems that a localized rebellion of her fellow synthetics, or GIs as they are called, has started, and Cassandra is trying to assist them. This rebellion has far-reaching implications that could change the already fragile treaty that has stopped intergalactic war. Cassandra has to make tough decisions, and some of them will haunt her long after the fighting has stopped. After making those choices, she heads home with three street-smart and highly advanced youths she has decided to adopt. Because of her fame and notoriety, she must balance her work life with raising children who have endured the horrors of war, the loss of parents, and the quick death of their innocence. As Cassandra learns how to become a mother, the results of some of her actions on Droze come back to haunt her, her children, and the entire federation. Lock and load—this is going to be a wild ride.

Joel Shepherd, why have I not been reading more of your books? This book is the fifth book in the series and the first book I have read in this series. Starting on the fifth book in any series is normally not a good idea, but the folks at Pyr were kind enough to send me a review copy. I figured if Shepherd is as good as they say he is, I should catch on to what is happening at one point or another. I like doing this sometimes since it lets me know if an author can tell me the backstory through the current narrative. I don’t fault authors if they don’t, but it is cool to see if they can tell the current story while giving me enough backstory so that I do not feel lost. Yes, a quick summary at the beginning of any book in a series is a good thing, but it is interesting to see how each author (and sometimes each publisher) handles that. After reading Operation Shield, I can say without any doubt that Shepherd expects that you have read his previous books. If you haven’t, the catching up is on you.

Now before you write him off as someone who doesn’t have the skill to fill you in on the past as he leads you into the future, consider this: Shepherd places the new reader in a firefighter’s carry through the story like a wounded warrior traveling uphill under heavy enemy fire. He isn’t hostile, but as an author he is on a mission and while he will never leave a person behind, he has an objective to take and he will back-brief you when he has the time. It took me about a hundred pages or so before I felt like I knew what was going on. I know I missed some important stuff in the interplay between some of the characters, but I couldn’t deny the action or the intrigue. I never felt completely lost, but there were times when I was swept up with the riptide rather than swimming with the current. In some ways, I think that made some of the action seem more harrowing.

Trying to fit this book into a specific genre is like trying to describe the movie Forrest Gump or the band Garbage to people. All of them have aspects of this and that, but to call them one type of story cheapens what they are. Operation Shield, and I guess the rest of the novels about Cassandra, span many genres including, but not limited to, sci-fi, hard sci-fi, cyberpunk, space opera, sociology, physiology, parenting, thriller, political intrigue, and the list goes on. Shepherd takes this story in directions that as a reader and reviewer I did not expect. The opening sequence was in-your-face hard military sci-fi, but then Cassandra started to contemplate her status as a synthetic being and has to learn how to deal with being a parent, when she herself is not completely emotionally mature. Shepherd tackles some very weighty issues without getting preachy. He does all of that while creating an intricate and multi-layered plot that goes much deeper than genetically enhanced beings running around a battlefield killing people and destroying things.

I was surprised that Shepherd could juggle everything he did without looking like he was juggling. The story came off like a mom with three kids who are well behaved in public, while at the same time letting the reader see just how much hell that mom goes through to get the public face on those seemingly “perfect” children.

Speaking of children, I thought the three children in this story were well portrayed—not realistic—but very well portrayed. I liked each of them, and they really blossomed as the story progressed. Shepherd showed a great understanding of the psychology of children and parents, and the struggles that we go through. He superimposed that into a setting that would stress even the most experienced parent. That acute understanding of child psychology was just the tip of the iceberg. Shepherd crawled into the heads of the full-sized humans as well, but I never felt like Freud wrote this story. Sandy’s thoughts as a GI were interesting and really gave a unique perspective on what a synthetic might be thinking.

Because there is so much going on in this book, I could spend pages and pages talking about all the subjects that Shepherd touched on, but if I did that then you would never get to actually read his stuff and see what I’m talking about. This book is a whirling vortex of awesome, and sometimes you won’t process everything until much later on, but that is OK. There is great military action, deep intrigue, vehicle chases, crashes, explosions, spaceships, drones, missiles, and much more. How can that be bad? Shepherd has created an exciting world with a strong protagonist, who happens to be female. I say that because while it is great to see a totally badass female protagonist, it is even better to see a total badass who happens to be female. Cassandra is this rare mixture of killing machine, passionate lover, and loving mother. Operation Shield has motivated me to explore more of Shepherd’s work, and I hope you’ll do the same.