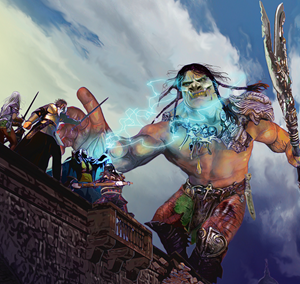 The horns of war have sounded!

Soldiers of Fortune, the military sourcebook for 4th Edition Dungeons & Dragons is now in print. Written by game designer and decorated veteran Matt James, this is the first Open Design product to offer campaign-expanding material for veteran 4th Edition gamers. Order it today in the Kobold Store!

In its battle-scorched pages, you’ll find material on how war is waged in Midgard, easily ported to any campaign. Players can build battle-savvy sellswords with the mercenary theme and new feats and powers such as Siege Engineer, precision onslaught, and lord of war. New paragon paths include the spellscourge mercenary and sacrosanct legionnaire (who can dominate minions with the divine conscript power.)

Soldiers of Fortune also offers players and GMs a tutorial on the art of war in…“The Midgard Stratagems,” edicts that have guided military strategists to victory. You can put these teachings to the test in the adventure “The Battle of Sanguine-Crag Pass” fighting alongside (and against) NPCs built from new templates to help GMs create a fantasy army: from the jittery conscript up to the dreaded Necrolord.

Serve as a free soldier, or raise your own army to win fame and glory! Pick up Soldiers of Fortune in print or PDF and let your enemies despair.

5 thoughts on “Soldiers of Fortune Now In Print”