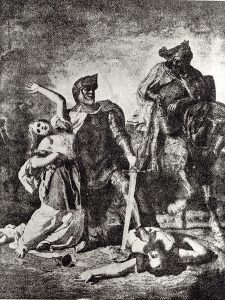 Within some shadowdancer training schools, an elite few develop a more martial focus to their abilities with the goal of becoming true warriors of the night. The shadow knight is an archetype of the shadowdancer prestige class.

Additional Prerequisites: Proficiency with all martial weapons, base attack bonus of +5.

Umbral Strike (Sp): At 1st level, a shadow knight can cast umbral weapon imbuement* once per day at a caster level equal to the shadow knight’s prestige class level. The DC for this ability is Charisma-based. This replaces hide in plain sight.

At 8th level, a shadow knight may instead cast greater umbral weapon imbuement* when using the umbral strike ability. A shadow knight may also expend a daily use of the shadow power class ability to cast this spell.

At 10th level, a shadow knight can also expend a daily use of the shadow call class ability to cast superior umbral weapon imbuement*.

*These new spells are introduced later in the article.

Shadow Bound Armor (Su): At 3rd level, a shadow knight calls either a shadow outsider or an undead shade and binds the creature to his or her armor. The shadow is bound into a single specific suit of magic armor, limiting its actions to only moving the armor itself. It is also limited to telepathic communication it as if it were an intelligent magic item and shares the senses of the shadow knight that bound it while the armor is worn.

The bound shadow reduces the armor check penalty by 1 (to a minimum of 0) and increases the maximum Dexterity bonus of the armor by 1. Every three levels thereafter, these bonuses increase cumulatively by 1 (2 at 4th level, 3 at 7th level, and 4 at 10th level). At 5th level, the bound armor is treated as one category lighter for purposes of movement (to a minimum of light armor), but not proficiency.

The bound shadow and armor are together considered an intelligent magic item for purposes of physical and magical effects. The shadow bound armor has a number of hit points equal to the original armor’s hit points plus one quarter of the shadow knight’s total hit points. The armor is affected by positive and negative energy depending upon the type of shadow bound into the armor (positive energy heals a bound outsider, while negative energy heals a bound undead shade), and effects that also affect objects. The bound shadow cannot be turned or commanded. Attacks and effects that successfully deal damage to the armor are dealt to the shadow after applying the armor’s hardness.

At 9th level, in addition to the other abilities, the shadow knight’s armor can cast blessings of fervor as a swift or immediate action, as a spell-like ability, once per day targeting only the armor’s wearer. The type of bonuses gained from the spell are chosen when the spell is cast. The caster level is equal to the character’s shadow knight level. Doing so does not count as an action taken by the wearer.

Alternatively a shadow knight may transfer his or her shadow to a different suit of armor at levels 3, 6, and 9. This is a ritual that takes an entire night to perform, but does not suffer the normal consequences for dismissing the shadow. If a shadow knight does not choose to transfer his or her bound shadow to a different suit of armor during these levels, the ability to do is retained until used. These uses do accumulate if they remain unused.

This replaces summon shadow and the 9th-level rogue talent.

Martial Focus: A shadow knight does not gain any bonus rogue talents of choice that a shadowdancer gets (at 3rd, 6th, and 9th level) but still qualifies for gaining the Extra Rogue Talent feat (Advanced Player’s Guide, page 160) at 3rd level.

Shadow Slip (Su): At 4th level, a shadow knight can take any actions he or she still has remaining on his or her turn after a shadow jump. A shadow knight’s shadow jump qualifies as having the Dimensional Agility feat and also qualifies as the monk’s abundant step class feature for purpose of meeting the prerequisites for the Dimensional Assault feat tree, but all other requirements must be met. This feat applies only to uses of the shadow jump class feature. This replaces the 3rd level rogue talent.

Watch for more on the shadow knight here on the Kobold Press site—spells and a feat are up next!