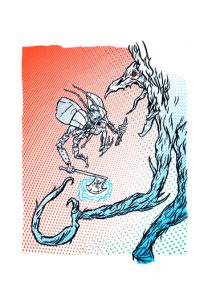 The print edition of Courts of the Shadow Fey for 4E recently shipped to patrons. Since roachlings and their demon patron Lord Akyishigal feature prominently in the adventure, new options—8 feats and a paragon path—are presented today for your roachling PC.

Benefit: You have grown two smaller, weaker arms beneath your normal set. You gain a +2 feat bonus to a single Dex or Str roll each round. In a round that you do not use this bonus, you may retrieve or stow one item (from a pouch, bandolier, or similar container) on your person as a free action.

Prerequisites: Wis 13, trained in Dungeoneering
Benefit: You gain darkvision of 6 squares.
Special: You may take this feat more than once. Each time you select this feat, your darkvision increases by 6 squares, but you become more sensitive to bright light. After the first time, you also gain vulnerability 2 radiant…

Daily • Fear
Immediate Reaction                      Close
burst 10
Trigger:
You or allies adjacent to you are targeted by an attack power.
Target:
All creatures in burst.
Effect: The current round ends, even if it is a surprise round. All creatures roll initiative.
Special: All allies in burst, including you, gain a bonus to initiative equal to your Dex modifier. Creatures outside of, or unaffected by, the burst go first.

Prerequisites: Con 15.
Benefit: A passenger inhabiting your stomach grants you sustenance from organic matters you ingest and provides a unique and disgusting attack power, vile regurgitation:

You spit a thick glob of mucous and spread it along the business end of your weapon, occasionally licking it to keep it coated.

Encounter • Stance, Weapon
Minor Action                     Personal
Effect: Any successful melee attack made with the weapon you are using when initiating this power also infects the target with the disease cesspool stew.
Special: An infected target must make an Endurance check at the end of its next turn to improve, maintain, or worsen the disease. It may make new checks at the encounter’s end and after each extended rest. Once a target is cured of this disease, it cannot be infected by it again. You are immune to your own disease. This feat may be taken multiple times. Each time, the Endurance DCs to improve, maintain, or worsen the disease increase by 2.

This fast-acting disease is found in swamps, water-filled open graves, and pools of sewage, and carried by vermin. The illness brings a scorching fever alternating with chills—these lessen only when the blinding headaches and nausea begin.

The carapace on your back splits open to reveal shiny, insectile wings, allowing you to escape your enemies.

Encounter
Move Action                      Personal
Effect: You can shift up to your speed over ground, liquid terrain, or pits. You can move through enemy spaces, ignore difficult terrain, and take no damage if the surface or substance you move across would ordinarily deal damage to you.

Special: The improvised weapon itself also suffers damage equal to the amount it has dealt during any critical hit.

Benefit: After using your tenacious survivor racial power, you need only make one succesful save to end the dazed condition. When you do, you may spend a healing surge.

Prerequisites: Con 15
Benefit: With slurping and crackling noises, organs slide back inside and your shattered chitin re-aligns itself. When you use your second wind, you gain regeneration equal to 2 + your Con modifier until you are reduced to 0 hp or are no longer bloodied.

Student of the Swarm Paragon Path

“My family… my swarm, feasts on rubbish, so now, I will provide for them. I’m here to take out the trash.”

As it is with your vermin kin, so it is with you. You are safer with your swarm around you, and in your presence, the swarm is mighty indeed. You study the habits of insect swarms and utilize those lessons in your day-to-day relationships.

Crevasse Crawler (11th level): When squeezing, you may move your full speed and do not grant combat advantage.

Unhealthy Aura (11th level): When you or an ally adjacent to you uses an attack power with the poison keyword, you may spend a healing surge.

Bug Eyed (16th level): You gain unusually large or protruding eyes, and your increased perception aids your allies. You don’t provide combat advantage to enemies when you are flanked. When you spend an action point to use the aid another action, use your second wind, or perform a total defense action, all adjacent allies gain a +2 bonus to AC until the start of your next turn.

Student of the Swarm Exploits

Many Bodies, One Mind (Student of the Swarm Utility 11)

Those who seek to isolate you find it a difficult task.

Encounter • Martial
Immediate Reaction                      Close burst 3
Trigger: You are pushed, pulled, or slid.
Effect: Allies in burst are pulled a number of squares equal to your Dex modifier in your direction and gain a +2 to all saves until the end of their next turn.

You raise your arms, and a cloud of nauseating flying roaches and debris obscures you and your allies.