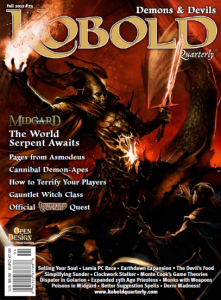 Bursting from the infernal depths in a cloud of fire and brimstone comes Kobold Quarterly’s Fall 2012 issue! Either this is the promised “demons and devils” issue, or the magazine is being guest-edited by Ronnie James Dio.

The full table of contents for this issue is after the cut:

Pick up KQ 23 in Print+PDF or PDF-only today!