Skip to content
Home / Delve into the Depths in the Kobold Blog / Rare Magic: The Friar, a Fifth Edition Variant Cleric 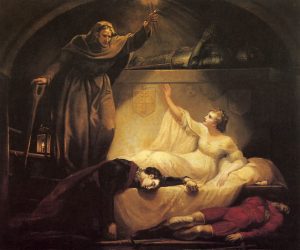 Friars are the spiritual leaders of their community, protecting the bodies and souls of their people from the temptation and evil that plagues the hearts of humanity. Friars are ordinary men and women who are made powerful by their faith in their deity, and the faith their followers have in them.

The power of a person’s faith can be just as strong as any magic. It can renew strength, give them the confidence to fight, and keep them fighting and working despite incredible pain. This faith is the power of a friar. The many gods of the world may be silent, but a friar has the force of personality and conviction to make people around them believe that the gods will answer their prayers. Harnessing this faith is what gives friars their power to heal, to strengthen allies, and to sear their enemies.

When you become a friar at 1st level, you gain the ability to channel the belief and conviction of those around you and put it to use either healing friends or harming foes. As an action, you call out a prayer to any ally who can hear you. Each of those allies rolls 1d4 + his or her Charisma modifier, granting you a number of faith points equal to the result. On your next turn, as an action, you can then use those faith points to touch a creature and heal it for that number of hit points. Alternatively, as an action, you can attack a hostile creature; on a successful hit, you deal extra damage equal to your faith points. On a miss, you still deal damage equal to half the amount of your faith points.

At 2nd level, you can turn your faith and conviction against your enemies, frightening them with the words of your deity. As an action, you can censure any creature that can see or hear you within 30 feet. Any creature thus affected must make a Wisdom saving throw (the DC is equal to 8 + your proficiency bonus + your Wisdom modifier). Undead and fiends have disadvantage on this saving throw. Failure means they are frightened of you for 1d4 minutes, or until they take damage.

Once you’ve used Inspire Fear, you can’t use it again until you finish a short or a long rest. Beginning at 5th level, you can use Inspire Fear twice before needing to take a short rest.

At 3rd level, you can inspire and motivate others with your faith. As an action, you can provide an ally with the faith to act again. All allies within 30 feet of you who can see and hear you can then take a bonus action to perform an ability check, a saving throw, or an attack roll. They gain a bonus to their rolls equal to your Wisdom modifier.

At 9th level, your duties as a friar have made you a well-learned person. You gain understanding of two additional languages or two tool proficiencies.

At 10th level, your faith and your holy symbol protect you and those around you from being harmed by evil. As an action, you can brandish your holy symbol outward and draw your allies close. You and any ally within 5 feet of you grant disadvantage on all attack or spell rolls against you by fiends or undead. This effect lasts a number of rounds equal to your Wisdom modifier.

You can use Bulwark against Evil again once you have finished a short or a long rest.

Next time: a druid with no spells!