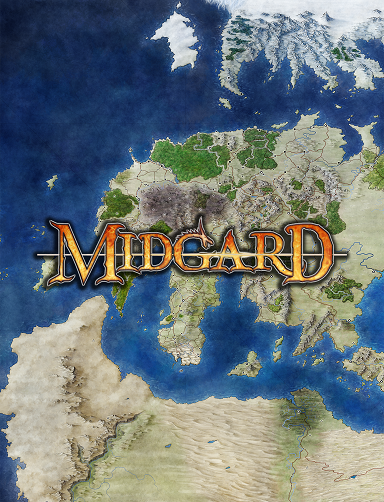 At 1st level, each player character in a Midgard campaign gets three icon relationship points. During character creation, they spend these points on positive, negative, or conflicted relationships with one to three of the 13 icons of the Midgard Campaign Setting. Each point represents one d6 to be used when trying to leverage their connection to the icon.

To check your icon relationships, at the beginning of a session roll a d6 for each point you have in the relationship. For every die that comes up a 5 or a 6, you get some meaningful advantage from that relationship that you can use at any time during the session—but when you use a result of 5, it also comes with a complication determined by the GM. (Note for GMs: The complication shouldn’t be so daunting that it keeps players from using their icon advantages! Give them an entertaining challenge, a side quest, or an unexpected consequence of using that relationship.)

At the beginning of the first game session, Sarah make her icon relationship rolls. She rolls 2d6 for Luminia’s relationship with Baba Yaga and gets a 4 and a 5. That’s one icon advantage, and it comes with a complication.

She then rolls 1d6 for her character’s relationship with the Dragon Sultan, and gets a 6—another advantage! At any point during this session, she can use those die results to get a benefit-plus-complication from having Baba Yaga as an ally, and a benefit from having the Dragon Sultan as an enemy.

Inspired by these results, the GM decides to use them to make tonight’s adventure more relevant to Luminia’s backstory. With a few small adjustments, an adventure about goblins and kobolds fighting deep in the mines becomes one in which those two icons have a stake in the outcome—the kobolds are trying to claim the mine for the Dragon Sultan, and the goblins have made a bargain with Baba Yaga in exchange for her aid. Luminia gets a turn in the spotlight as she strikes a blow against her hated enemy and possibly decides to help the goblins in their dealings with the feywitch.

Here are the current thirteen icons of Midgard, updated to reflect the changes to the setting described in the Midgard Worldbook. Unlike the default icons presented in the 13th Age Roleplaying Game, the Midgard icons vary wildly in power and scope of influence. The Queen of Night and Magic is a goddess. The Dragon Sultan rules a mighty empire. The King of Bears leads a remote kingdom, and the Queen of the Road wanders as a vagabond. But Midgard’s long history, vibrant trade, and deep magic connects them all and extends their reach far beyond their areas of geographic influence: the Hidden Princess cares about the price of grain in Zobeck, and a prisoner of a goblin tribe in the Wasted West might find unexpected help from a courier on an errand for Baba Yaga.

In the weeks to come we’ll give each of these icons a full writeup. In the meantime, check out the 13th Age compatible products from Kobold Press: Midgard Bestiary, Deep Magic, and The Wreck of Volund’s Glory.

New to 13th Age? Get a great deal on the game through December 2019 with two Bundles of Holding: the 13th Age core set and 13th Age Adventures.

A hunched crone with iron teeth and a ferocious gaze, Baba Yaga has existed for as long as anyone remembers; she may be as old as the world. “Grandmother” is a hoarder of secrets and a powerful fey who makes it her business to know everything. She flies through the air in a mortar, wielding a pestle, and has aided or destroyed some of history’s greatest heroes and villains.

Lucan I is a powerful vampire who rules a kingdom where the undead reign, and humans serve in fear—a terror that the entire Crossroads region may soon know.

The scarred and cunning dragonkin ruler of the Mharoti Empire, Dread Sultan Ozmir Al-Stragul is a general of great skill and a politician of utter ruthlessness.

EXARCH OF THE WASTES

Exarch Vermes II is the most influential wizard in the Wasted West, a land riddled with mysteries and horrors. Leader of Bemmea’s Ninemage Council, the Exarch has made that city into the foremost center of magical study in Midgard.

The first minotaur to serve as First Duke-Admiral of Triolo, Cadua is a polarizing figure even after 18 years of service. Most revere him for his stance against the Mharoti and consider him a promising sign of Kyprion’s and Triolo’s joint destiny. Others feel sure his steerage has brought the republic to the edge of ruin.

Nicoforus the Pale is the undisputed ruler of the Dread and Endless Imperium of the Darakhul, a civilization of ghouls deep within the realms subterranean. Through cunning and relentless cruelty, he’s led his legions to repeated victories over the other races in the underworld.

Kalvora Moonsong Kalthania-Reln-Orosnig is a young elf who carries herself with ease and confidence. She claims to have traveled from the Summer Lands to the Grand Duchy to claim her birthright as the granddaughter of the Beloved Imperatrix.

This esoteric society is open to all dwarves who seek perfection in their chosen craft. Many high-ranking members of dwarven society, even some monarchs, count themselves among the ranks of the Illuminated.

The King of Bears rules the bears and lycanthropes of the north, served by a cadre of witches and oracles. Once his royal court spent its time feasting and brawling, but with the trollkin raiders growing ever bolder and the giants rallying to Loki in preparation for Ragnarok, it is time for the bear to show his claws.

The Master of Demon Mountain’s spells and incantations carry great potency. The demons praise him, and his many children are tiefling ambassadors to the world and heralds of his power. But his real goal is to reach immortality—although first he must break the pacts binding him to Demon Mountain.

The Oracle is blessed—or cursed—with divine insight and gifts of healing and prophecy. Once a minor player in Midgard’s affairs, she now commands tremendous influence, and her city of Kammae Straboli has risen to become the mightiest of the Seven Cities.

QUEEN OF NIGHT AND MAGIC

The Queen of Night and Magic rules the Shadow Realm, where she dreams of conquest, blood, and loss. She remembers too many worlds that once were hers—and now that the shadow roads are opening across Midgard, perhaps they will be hers again.

QUEEN OF THE ROAD

The ravenfolk Queen of the Road looks after all who travel without ceasing and whose bags are always packed and ready to go: merchants, refugees, wandering beggars, outlaws, and pilgrims. In these times of darkness, she may be the Crossroads region’s last hope.

Here’s how we envision the icons in the Midgard Campaign Setting, but you should feel free to change them to fit your campaign. Maybe your version of Baba Yaga is a true friend to heroes, and the Dragon Sultan is a good and just monarch presiding over a golden age.

Heroic Icons: Usually the First Duke-Admiral, King of Bears, and the Illuminated; possibly the Exarch, Hidden Princess, and Queen of the Road.

Ambiguous Icons: Usually Baba Yaga, Hidden Princess, Oracle of Kammae, Exarch of the Wastes, and Queen of the Road; possibly the Queen of Night and Magic and the Illuminated.