Skip to content
Home / Delve into the Depths in the Kobold Blog / Races of Midgard: Chernomoi 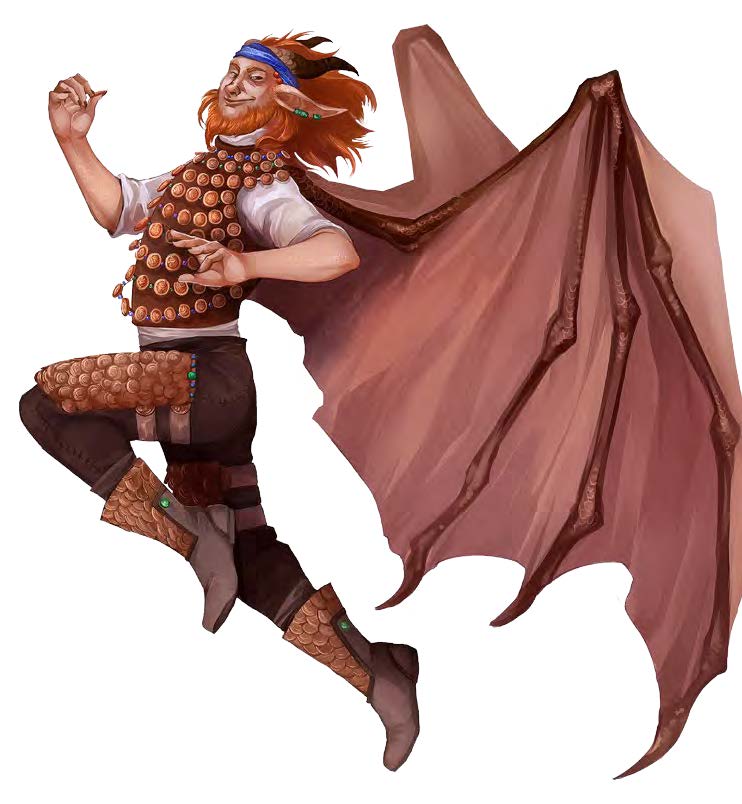 The world of Midgard is home to many races, some hailing from cities, some from the wilderness, and others from the hidden depths of the world. Chernomoi are one of those many calling this world home. These well-dressed folks generally reside around one specific region of the world, the Mharoti Empire. Living among the larger draconic races, chernomoi have been given the nickname “lair sprites.”

Description: Chernomoi are tiny, humanoid dragonkin with tan, scaly skin and pointed ears that protrude from their floppy hair. Protecting their body is a suit of leather armor covered in trinkets or coins. Their leathery wings jut out from underneath the back of their glittering armor.

Places of Residence: Chernomoi choose to live in the homes of those who share a similar draconic heritage, such as dragon or dragonborn. Sometimes they live there as guests, familiars, or guardian pets. While there, they tend to move from room to room, tidying up and occasionally keeping small trinkets, coins, or gems as compensation. During their nightly duties or chores, chernomoi act as the first line of defense against intruders. Since chernomoi are such small creatures, they generally choose to flee first but are extremely fierce fighters if they are forced into such situations. If such a circumstance should arise, they shriek to rouse the household to aid in its defense.

Age: You reach maturity by the age of 35. Your average life span is expected to be around 100 years.

Alignment: Your ancestors have lived among dragonkind for centuries. You feel at home and welcome moving among those who share a draconic bloodline. Your moral compass is not bound by those you live with: you may choose your own path in life, and their moral code may not be your moral code. However, you do honor and protect those around you and treat them as family. Your general stance is a neutral one, letting others deal with the moral implications of the larger world, so that you can tend to the things that matter most to you, like your home.

Languages: You can speak, read, and write in Common and Draconic.

Size: You are 1–2 feet tall and weigh no more than 20 pounds. Your size is tiny.

Draconic Heritage: Due to your heritage, you know the following spells: mage hand, prestidigitation, mending, and message. Additionally, when you reach 5th level, you learn the spell invisibility, which you may cast once per long rest. Your spellcasting ability modifier is Charisma.

Shriek: You emit a loud shriek. All creatures within 60 feet who can hear you take 10 (3d6) thunder damage or half as much with a successful Constitution saving throw based on your spell save DC. You may use this ability once per long rest.