Skip to content
Home / Delve into the Depths in the Kobold Blog / Questioning the Trapsmith: An Interview 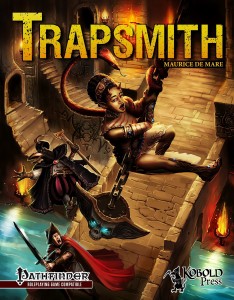 Maurice de Mare, trapsmith and author of the traps and adventure you’ll find in the Trapsmith book by Kobold Press, has taken several minutes of his time to answer a few questions for us! Come see what he has to say about designing traps, playtesting the adventure, and Paizo’s RPG Superstar.

The design and the result it brings. Let me explain further. After designing hundreds of traps, I’ve come to realize that designing traps is strongly related to something else that I enjoy doing: fencing. Fencing, or any other combative skill, is all about action-reaction. You can win by being stronger or faster, but there is always someone stronger or faster, so to keep winning you need to be smarter. In fencing, that means you need to feint and attack with a second intent. So when designing traps, I set up the initial strike, think of a likely counter and have something ready to deal with the counter if or when it comes. I like engaging in that sort of thought process, so it is very rewarding.

I’ve also come to realize over the years that I like to design new and exciting ways to hurt people—characters, I mean. Saying it aloud like that makes me feel and sound like an awful person (I am actually pretty nice), but with traps there is always something new that can be tried. A wide-open design space is such a generous gift.

What do you find most challenging and most rewarding about designing traps?

I’ve talked about some of the rewards already, but when I was doing the Gavin series, it was very rewarding to see all the suggestions from the readers for items that could be used for trapsmithing, so a big thank you to everyone who made a suggestion. Some of those items posed a challenge, but that made it all that much more fun to create a trap out of them.

When you were working on the adventure for Trapsmith, you playtested it. Any fun stories from the playtest process?

First, another thank you to Bram, Nicky, Roel, and Ronald for playtesting it with me. What I remember is their creative interpretation of my request for a standard party. I wanted a fighter, a cleric, a wizard, and a rogue to show up for the playtest. I got the rogue, the wizard, a camel-mounted paladin, plus a druid with a tiger companion. So much for “standard.”

You did well during the first few rounds of the most recent RPG Superstar. What was that experience like? What did you enjoy most about it? What did you learn in the process of working on your submissions?

I think I really enjoyed the challenge of it all. It is not easy, and that makes it all the more worthwhile. What I learned while in competition is that writing all those traps on the KQ blog was valuable writing experience. If you don’t keep in practice, you can never design / write  / re-write quick enough to keep up with the competition. The practice also allows you to turn in solid stuff. I know the public recognizes a solid effort and most of the time they will vote for something solid and usable over something great but incomplete. At least, I think that is what got me through the archetype round. My entry was my very first archetype ever, and it was solid but not great. I also learned that my writing can evoke some serious feelings: people hated and loved my monster. And, as a writer, evoking serious feelings is what you try to achieve.

In a few more months, the RPG Superstar season will start again, and I look forward to it already. It is a great experience. Even if you are not picked, you can learn so much from it. But remember, entering is easy—the competition is fierce!

You can snag a copy of Trapsmith in at Paizo, DriveThru RPG, or RPG Now!

4 thoughts on “Questioning the Trapsmith: An Interview”