Skip to content
Home / Delve into the Depths in the Kobold Blog / Pulp Sorcery: The Secret Art of Better Spell Descriptions 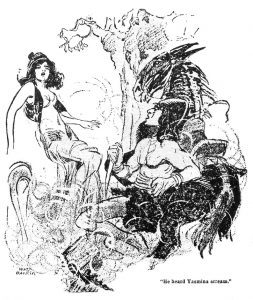 “Sorcery thrives on success, not on failure.” —Robert E. Howard, “The People of the Black Circle”

When it comes to mechanical systems in RPGs—Pathfinder in particular—there are perhaps none more esoteric than the malleable rules that govern magic. Casters and their iconic spells have evolved over the various editions of D&D into what we know of them today, including the litany of arcane and divine spells found in the Pathfinder RPG Core Rulebook and beyond. And though the names and numbers may have changed, one axiom remains: these “one-time magical effects” can shape the game in extraordinary (and often unimaginable) ways.

Uncle Ben’s old words of wisdom ring true: “With great power comes great responsibility.” Keen observers may notice an extension of this notion at the tabletop, as spellcasting characters frequently rest in the hands of more seasoned players. After all, the ins-and-outs of the magic system can seem daunting—especially when each spell acts as something of a special case scenario. But I think there’s more to this than a simple aversion to lists and statistics. Thinking back to my earliest days as a player, I recall spells being the stuff of evil wizards and their foul minions. Sure, my half-elf fighter with his hackneyed name may have wielded a few wondrous items and a magic weapon or two; but raw magic was the unknown domain of the Dungeon Master. The more I played, the more I wanted to try those spells on for size. And, eventually, I wanted to reveal my newfound arcane diableries from the other side of the screen.

There is a wonderful mystery inherent to the magic of Pathfinder and D&D. Behind the mundanity of casting times and saving throws lurks an incredible dramatic suspense. And this mystique arguably stems from the source material our beloved roleplaying games were derived from. The late Robert E. Howard leads the list of Gary Gygax’s “most immediate influences” in Appendix N of the original Dungeon Master’s Guide. And not only have Howard’s weird tales of sword and sorcery influenced me profoundly as a creative professional, they are the blueprint that defines my favorite style of fantasy roleplaying—one in which magic is feared as much as it is fancied.

Of all the pulp era writers, Howard has perhaps contributed the most to our modern lexicon of sword & sorcery. The simple notion of a savage warrior pitted against a cruel and calculating conjurer was a trope that Howard essentially invented with his stories of Conan the Barbarian and King Kull of Atlantis, among others. (And if he didn’t invent them, by Crom he certainly perfected them!) While contemporaries like Lovecraft and Lieber were weaving their own tales of cosmic wizards and degenerate madmen, Howard was shaping the prototypical sorcerer. Villains like Thoth Amon, Thugra Khotan, and Thulsa Doom have become legends among genre storytellers for a good reason—they embody our basic fears of the unknown. And this idea is strangely reflected in the esotery of Pathfinder’s magic system. Unless players have studied Chapter 10 of the manual or had extensive histories with spellcasters themselves, higher-level spells are relatively unknown quantities to them.

But the fact remains that for many of us—through heavy interest or sheer experience—the spells of the Core Rulebook have been all but memorized. Far too often that mystique we discussed is lost in the maelstrom of initiative, Armor Class, and conditional modifiers. Once combat kicks in, little game time is given to such trifles as spell components. Many gaming groups ignore material components altogether, seeing them as just another tedious metric to keep measure of. Perhaps there’s a reasonable explanation for this trepidation.

Many of the spells in the Pathfinder RPG Core Rulebook are straightforward in both description and diegetic execution. But when it comes to components—verbal, somatic, or material—the Core Rulebook is somewhat more obtuse. For instance, it tells us exactly which materials are used while the specific method of their implementation often remains a mystery. Details on the particulars of somatic gestures are few and far between; and it’s a rare occasion that verbal components are elucidated whatsoever.

Personally, I’ve long felt that this top-level method of describing spells and their magical effects doesn’t quite synchronize with the stories we take inspiration from in the first place. Sure, there should be unknown qualities and quantities for dramatic effect; but a spell—a game mechanic that by its very definition changes a condition of the shared storytelling world—should never be reduced to a mere handful of damage dice and a difficulty class. I’d argue this is a waste of prime storytelling potential and offers the perfect time for spellcasters to shine—from both sides of the screen.

Our mission, should we choose to accept it, is to infuse our tabletop spellcasting with the same reverence and roleplaying excellence we extend to otherworldly exploration and parlay with NPCs. This begins easily enough with expanding the spell descriptions we’ve been given. As mentioned, many of the spells in the Core Rulebook defy the need for this level of scrutiny due to their simplistic nature. But that doesn’t mean they should be relegated to the tedium of rote. For instance, magic missile is a 1st-Level spell and an early addition to almost every grimoire. Its description reads: “A missile of magical energy darts forth from your fingertip and strikes its target, dealing 1d4+1 points of force damage.” But how is this magical energy made manifest? What color is the energy? And what eldritch gestures brought it into being? These are questions worth asking—the appropriate answers to which can offer newfound excitement from that tired scattering of four-sided dice.

Fireball arguably represents the pinnacle of what we can expect from spell descriptions in the Core Rulebook. Though we’re really not told how the “ball of bat guano and sulfur” fits into the arcane equation, we are treated to the following prose: “You point your finger and determine the range (distance and height) at which the fireball is to burst. A glowing, pea-sized bead streaks from the pointing digit and, unless it impacts upon a material body or solid barrier prior to attaining the prescribed range, blossoms into the fireball at that point.” The magic words, as always, are nowhere to be found. But we’ve got a singular visual description that everyone at the table can imagine with clarity. That cinematic moment is allowed to come alive, and all of a sudden it’s not simply about how many d6 worth of damage is going to hit home—it’s about that focusing of unknown, eldritch energies and a spectacular arcane gesture that set the inevitable destruction in motion.

Regrettably, spell descriptions in the Core Rulebook featuring this level of detail are scarce. And that’s how it’s been since the dawn of D&D. I don’t really hold any game designers accountable for this omission—after all, the rules are adequately covered. But perhaps it’s our duty as practitioners of the mystical arts to put a little more effort into our magic systems and how we roleplay them. With a little legwork, you can come to the game table with a full complement of homegrown spell components—thoroughly realized and ready to astound. As a GM, this can provide more amazement and wonder for your players than a mountain of peripherals like miniatures or maps. Encourage your players to do the same. Try offering XP rewards or situational modifiers for exemplary style. After all, this is a game. We should be having fun with it.

So channel your best Robert E. Howard (or your own spirit writer) and bring those spell descriptions to terrible and astonishing life. I’d like to leave you with a few lengthy passages from Howard’s “The People of the Black Circle,” a story that details one of the most harrowed confrontations with sorcery in Conan’s illustrious career—and one that offers a quintessential look at the literary origins of RPG spells and their components. See how Khemsa the mesmerist prepares his own special kind of conjuration…

“For minutes the scene held motionless; then the man on the ledge drew a cryptic symbol in the dust on the rock with his forefinger. The Wazuli did not see him place anything within the compass of that emblem, but presently something gleamed there—a round, shiny black ball that looked like polished jade. The man in the green turban took this up and tossed it to the Wazuli, who mechanically caught it.”

Once delivered to the Wazuli chief Yar Afzal, the hideous truth of the illusory bauble is revealed…

“In his right hand, moving toward his girdle, [Yar Afzal] had suddenly felt movement where movement should not be. His voice died away as he stood and glared at nothing; and inside his clenched right hand he felt the quivering of change, of motion, of life. He no longer held a smooth shining sphere in his fingers. And he dared not look; his tongue clove to the roof of his mouth, and he could not open his hand. His astonished warriors saw Yar Afzal’s eyes distend, the color ebb from his face. Then suddenly a bellow of agony burst from his bearded lips; he swayed and fell as if struck by lightning, his right arm tossed out in front of him. Face down he lay, and from between his opening fingers crawled a spider—a hideous, black, hairy-legged monster whose body shone like black jade. The men yelled and gave back suddenly, and the creature scuttled into a crevice of the rocks and disappeared.”