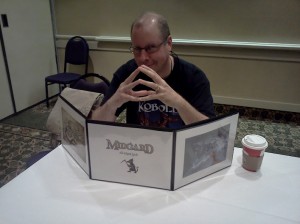 At this year’s Gen Con I ran an Old School Hack game set in the Wasted West of Midgard. OSH is one of my favorite systems for a quick, fun, exciting one-shot with people who have varying levels of experience with games — I’ve even run it during lunch breaks at work.

My adventure was titled “Danger at Deathless Gulch,” and for the pre-gen characters I either ported Midgard Campaign Setting classes to Old School Hack and turned their powers and abilities into talents, or I reskinned existing OSH classes and talents to give them a Midgard flavor.

Here’s an example of a new class I created, and its talent:

Black Spire Sorcerer
Talent: Writhing Arms – focused spell, usable only once per arena
Your arms become constantly writhing tentacles. If you successfully cast the spell in combat, it increases your Armor Class by one category and you can attack unarmed without penalty. The effect lasts until you take damage from a successful attack. You cannot wield weapons or hold objects while under the effect of this spell.

And here’s one that I reskinned, using the Dwarf class’ “Make an Oath” talent:

White Knight of Bourgund
Talent: Knightly Oath – focused attack, usable only once after rested
As a White Knight of Bourgund, you are connected to an armor-bonded mage who casts spells through you. By spending a few moments making some sort of solemn vow (“You shall not pass”, “Only you shall feel my blade”, etc.), you invoke this magical relationship to get a +1 bonus to all attack rolls as long as the vow’s conditions are in effect. Once the vow is broken somehow, all your combat rolls suffer a -1 until the combat ends.

The PCs were members of the Duke of Verrayne’s elite Black Band of warriors, sent on a mission into the Goblin Wastes to retrieve the Black Spire Codex from a dwarven airship that had crashed in Deathless Gulch. Numerous interested parties were converging on the crash site, including a trio of Minotaur outlaws, a representative of an old Barsellan pirate family, and a villainous ink mage known as Black Quill. If that weren’t enough trouble, the gulch was sacred to the Ghost Goblin tribe, who believe that anything that dies in Deathless Gulch rises again as undead. The party had to evade, outwit or out-fight their opponents and secure the Codex.

The players did an amazing job, getting right into the Midgard spirit and taking advantage of OSH’s free-wheeling, over-the-top nature. Many awesome points were handed out, and the winner got one of the brand-new Midgard t-shirts. It was a great time, and one of the best experiences I had at Gen Con 2012.

(The GM screen you see in the photo is a Savage Worlds customizable screen. I inserted pieces of Midgard art in the front, and on the GM side were a couple of printed rules pages from OSH and an outline of the adventure.)