Skip to content
Home / Delve into the Depths in the Kobold Blog / Planar Warden: An Archetype 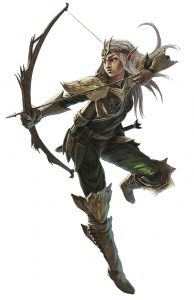 In areas of the world where planar boundaries are thin, contact between the mortal races and extraplanar beings is commonplace. At times, this interaction is peaceful; at others, conflict the likes of which legends are made erupts. In these places, rangers are often called to mediate or, if necessary, eliminate threats from beyond. These rangers are planar wardens.

Starting at 3rd level, you learn an additional spell when you reach certain levels in this class (see table below). The spell counts as a ranger spell for you, and it doesn’t count against the number of ranger spells you know.

Additionally, whenever a celestial, elemental, fey, or fiend makes a saving throw against your spells, add your Charisma modifier to the spell’s save DC.

Starting at 3rd level, you understand that many of the opponents you face are capable of closing great distances instantaneously by means of teleportation and other forms of dimensional travel. As such, you train to be a capable combatant up close and from afar.

If you’re currently playing a ranger, add the following feature:

Extra Attack. Beginning at 5th level, you can attack twice, instead of once, whenever you take the Attack action on your turn.

At 11th level, your knowledge of extraplanar beings and their capabilities gives you tactical advantages both on and off the field of battle.

A Way With Words. You have advantage on Charisma checks against celestials, elementals, fey, and fiends.

Expose Weakness. When you hit a creature with a melee weapon attack, you can use your reaction to take the Help action.

Pierce Resistance. When you hit a creature with a ranged weapon attack, you can use your reaction to choose one of cold, fire, or lightning. The next damage of the chosen type done to that creature ignores resistance to that type. This effect lasts until the start of your next turn.

At 15th level, you’ve incorporated the fighting styles of planar beings into your own, allowing unprecedented mobility on the field of combat.

For even more player options, check out Midgard Heroes for 5th Edition.

3 thoughts on “Planar Warden: An Archetype”