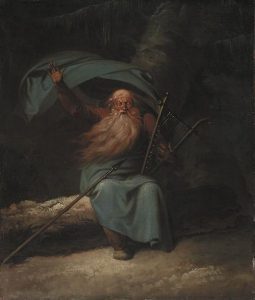 The following character concept uses rules compatible with the fifth edition of D&D. Enjoy traveling the planes with a bard from the College of Gates!

Bards are consummate wanderers. Where wizards and clerics might spend their lives seeking wisdom or knowledge in the halls of learning or in meditation, a bard knows you have to go out and find them. Those of the College of Gates have set their sights beyond the material realm to more distant worlds. They are scholars of the planes themselves, and they gather wherever traveler’s tales are told—be it a tiefling bar on the outskirts of Hell or around a crackling campfire of clockwork angels on the fields of law. They are as at home on a ship of sea, or stars, or aether as they are walking a tavern’s stage. The horizon calls them onward and outward. Maps and travel guides produced by these bards are the envy of all who travel the worlds.

At 3rd-level, you gain proficiency with cartographer’s tools and navigator’s tools. You want to know where you are going and where you have been.

Also at 3rd level, you learn to inspire others to continue on the path set out for them. A creature that has a Bardic Inspiration die from you can roll and add a number of feet to its move equal to five times the result. Bonus movement gained this way treats difficult terrain as normal terrain.

At 6th level, your spell list expands to include the following spells:

You do not automatically know these spells, but may learn them as you would any bard spell.

Starting at 14th level, you can expend one use of Bardic Inspiration to cast the spell misty step in place of a move action.

4 thoughts on “The College of Gates”