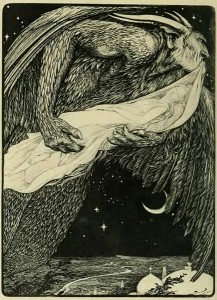 Designer Stephen Radney-MacFarland tells us more about the jinnborn, which are featured in the Southlands Kickstarter.

“One who leaves the path belongs to the jackals.”

If we ever gain the ability to conduct a huge character census, I think we’ll find that an abundance of orphans populate the worlds of the Pathfinder Roleplaying Game. My own collected but still substantial if only anecdotal evidence suggests the percentage of parentless PCs would be quite high. It makes sense. The lack of ties makes it harder for a GM to mess with beloved alter egos, and mythology is rife with heroes who have to shed (or have had pruned) the vestiges of mortal and mundane existence.

Consider only the cross-blooded races of Pathfinder, and the percentages of parents who are MIA or beyond distant increases. You may have a hot fling with an orc, but it doesn’t make him a good father, and the celestial parents of aasimars have better things to do with their immortal existence than show up to fencing practice every week.

From the start, I wanted to go another direction with the jinnborn.

I envisioned a living, thriving culture with deep ties to both parts of their ancestry—the tenacious survival instincts of humans coupled with the mystery of the jinn. Unlike angels, who tend to meddle and then evaporate into the higher planes, and orcs who see savage virtue in letting their children struggle to survive, jinn are a constant presence in the lives of their “children,” albeit often indirectly. But they don’t dabble. They cajole, intimidate, plead, trick, and sometimes act as inspired leaders. The jinn lead in both this world and the hidden world where their own petty politics and that of the Wind Lords holds sway. These jinns are all members of the genie race: djinn, efreeti, jann, madrid, and shaitan, and unlike other dual-blooded races, there is no single genesis for the jinnborn. Not every jinnborn tribe is created by a secret dalliance at an oasis, or even a carnal act. Some are transformed by bond, be it one of protection, gratitude, or even servitude. Other times the transformation is mysterious even to the parenting jinn, and it hints toward a destiny proscribed by the winds of fate and destiny.

This diversity of genesis holds root in the essence of the jinnborn themselves. Different tribes and sometimes even individual members of tribes manifest the gift of the jinn in different ways. Some gain affinity to the elements of their patron jinn or jinns, while others tap into the mysteries of the hidden world. All manifestations of jinn power are believed to contribute to the siraati: the word’s roots are a mix of Terran and Auran, but it can literally mean path, but is more often used to mean destiny. The siraati of a tribe, and often the mythology that grows up around it, guide the customs and the perceived destiny to such an overwhelming degree that the jinnborn call themselves the sab siraat—people of the path.

The jinn or jinns connected to a tribe stay relatively active in the lives of its people. Like a heroic champion, they show up in times of need, crushing enemies, or staving off great danger, but they are just as likely to involve their tribes in the twisted politics of the jinn, and ask for help in some strange task or crazy adventure. Often, because the politics of the tribes and of the jinn are so interconnected, the direct council is often given to a single individual, or a cabal of elders or the initiated. As they say in the deserts, politics is a game best played within the shade.

Of course, such a strong connection between the jinn and the sab siraat does not preclude jinnborn from adventuring. While there are those jinnborn who leave their tribe to strike out on their own, they can often do so with great risk. The more times a jinnborn walks in defiance of his siraati, the more his spirit is corrupted. This can manifest as nervous tics, strange phobias, or just plain bad luck, but some fall into madness and hate. Other sab siraat are persuaded to venture out beyond the deserts and the badlands by the jinn of their tribe. Often oracles, witches, and shaman walk their path with direct or indirect aid from their jinn host, as champion or pawn in the jinn’s complex struggles. What is clear is that the relationship between the jinnborn and its patron jinns provides a spiritual sustenance that is unlike the connection between other humans and their plane-touched parents and ancestors.

Playing a sab siraat involves more than achieving individual goals and rising in level. It involves finding or going against one’s path within the tribe, among the jinn, and amid the strange machinations of the Hidden World.

Add more to your Southlands campaign by joining the other patrons in the Southlands Kickstarter.

1 thought on “Path of the Jinnborn”