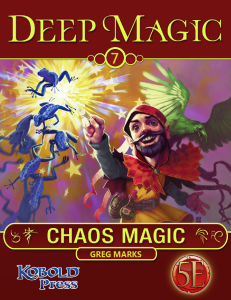 The ability to channel and manipulate raw arcane power does not belong to sorcerers alone. A few wizards and bards have learned to dominate the chaotic energy of change itself, leading them along a narrow path that circles a pit of madness. Cling to the path, and avoid slipping into that roiling pit, and you will be rewarded with the power to alter reality through strength of will alone.

Whether you’re a wizard skirting the edge of madness, or a thrill-seeking bard who follows the path of the luck stealer, you live for unpredictability and danger. In fact, sometimes you feel more at home in the dungeon than at the inn…

Get Deep Magic: Chaos Magic for 5th edition at the Kobold Store today!