Skip to content
Home / Delve into the Depths in the Kobold Blog / One Too Many (Voices in My Head): The Beat Down in O-Town 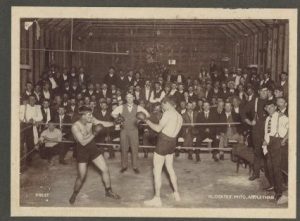 Welcome to Greg “Twinkle Toes” Vaughan’s One Too Many (Voices in My Head). His last, best chance to exercise those pesky demons. In his column you’ll find… I really have no idea, but he gave me $20, so… all yours Greg!

O-Town is what I call Oklahoma City… no, not normally, only when I’m trying to rhyme something with “beat down.” It’s also where I live. Okay, I think that’s all the explanation I need there. Moving on…

I work (I mean my real-life day job, not my spectacularly jet-set, James Bond lifestyle of freelance RPG writing) in a conservative industry at a little office building on a busy intersection in a little corner of Oklahoma City. Kind of a Clark Kent sort of deal but without the glasses and the little forehead curl.

Like Clark Kent, sometimes you hear that cry for help and have to rush off to find a phone booth (good luck), or a semi-clean public restroom (yeah, right), or more likely get arrested for public indecency while trying to change into your Superman skivvies in the middle of a street. I think my metaphor is beginning to break down here.

It was no cry for help that nearly caused me to be arrested for public… did I say indecency? I meant intoxication. No, it was something much more insidious and threatening to the very moral fiber of this great nation. I call it Office Morale Day…

Because conservative industries in a depressed economy get, well, you know, depressed, somebody on the great Ladder in the Sky decided what we needed was an Office Morale Day. I’ve got to hand it to them because usually their idea of morale boosting is sending a memorandum that the beatings will continue until morale improves. This time, however, it was much, much worse… a parking lot carnival.

Now, I’m not against parking lot carnivals. I generally just ignore them. However, they often have food, and this one was no exception: catered bar-b-cue, state-fair-style corn dogs, and oh! oh! funnel cakes! Let the games begin!

About 45 minutes and 9,000 calories later, I was agreeably stuffed and supremely sleepy. Just about time for a quick nap under the desk. Then I heard the shrill, tornado siren voice of “Robert” screeching, “A boxing ring! They’ve set up a boxing ring!”

“Easy, easy, Robert,” I said, “I’m right here. And how did you get that tornado siren under my desk?”

Robert is one of those guys that everyone has met. The kind that never played any sports in school but talks as if he won State in all of them. There’s never a competition he didn’t trash talk about or a game he didn’t bet against you in. The sheer volume of words he could generate on any subject in which he had exactly zero experience could choke a water buffalo. Okay, I don’t know if that is true, but I think water buffaloes are funny, so I threw it in there anyway.

Sure enough, a quick scan of the parking lot showed that a giant inflatable boxing ring had been, well, inflated—complete with massive, 2-ft.-long boxing gloves and safety helmets. Apparently, it also came complete with “Blake”—another coworker of mine—wearing a set of said gloves and helmet and looking at me with murder in his eyes as he stood before the entrance to the inflat-o-ring.

It seems Robert had gotten to him first and given him an earful about something I may or may not have said about his maternal great aunt… some people are so sensitive. So Robert quickly brought me helmet and gloves, and as my hands slipped into the 20-lb., canvas-covered foam polystyrene, I knew it was on. Oh yeah, eye of the tiger, baby. No wait, even more than that, eye of the dire tiger, baby.

In a flurry of crowd-gathering catcalls, taunts, and slurs, I found myself in the inflate-o-ring facing off with my new arch-nemesis, Blake. “You ready to go, Greg?” he asked.

I noticed that the buckle on my safety helmet had slipped so that I was looking partially out the earhole, so in true Queen’s Rules fashion, I held up my right hand to single a timeout and tried to adjust my headpiece.

My vision blurred, my jaws stung, and I was now looking fully out the earhole of my helmet. Blake had won the surprise round. But now, the game was truly afoot… er, a-ring… uh, whatever.

Helmet righted, I faced off against Blake. Initiative roll. I won. I held my action to see what his move would be.

He came in high, massive foam gloves up. My Dodge feat saved me as I ducked aside and brought a right in low under his gloves. The blow wasn’t hard—he must have some sort of damage reduction—but it made him bring his gloves down. What’s this? I seem to have iterative attacks? I never knew I had made 6th level!

Oh well, waste not want not; my left came in high over his gloves and hit him in the face. He staggered and went to one knee: that’s one fall. Aw, now I see his weakness: DR 10/blow to the face. The crowd went wild. Somebody really needs to shut off that tornado siren.

The next few rounds were more dance and jab than fight… as much as you can call two middle-aged men in work-casual attire on a giant moon bounce wearing 20-lb. plastic gloves dancing and jabbing. I had given up my place in the initiative order and needed to get it back.

After a few failed feints and, I admit it, a trip attempt, I stepped back and readied an action. My Bluff roll was high; he bit. POW! A right to the cheek! Blake was down again. Two falls.

The next round I got cocky and tried an Acrobatics check to tumble through his threatened spaces. Instead, I stepped too close to the edge of the ring and my foot slid into a foot-deep seam in the canvass. “Hold on a sec, Blake,” I started to say.

Two falls to one.

Now was go time, but I realized that it was about 120 degrees in the inflate-o-ring, and about 15 minutes earlier, I had eaten the equivalent of 3/4 of a cow and a goodly amount pig chased with lard and sugar. The signals from inside were telling me I had to end this quickly or the ring was going to get a new paint job… and not in a color anyone wanted to see.

Now when I was in high school and part of college, I played football. That doesn’t really have any bearing on this because I now weigh approximately 40 pounds more than I did then, but it makes me feel good to say that first to support the notion that there was some sort of athleticism at work here.

Really though, it was just that I outweighed Blake by quite a bit and used this to my advantage. I let him take a swing and performed a bull rush. I pushed him back across the ring, and he couldn’t get his gloves up effectively. He took a swing at me and then tried to retreat further. Aha! Attack of opportunity for me. A crit! Blake went down in a heap, the crowd went wild, Robert the tornado siren got even louder, and then the cops pulled up.

Shaken and dizzy from the heat, exertion, and far too much bar-b-cue, I clambered out of the ring. Blake sat up in a daze, saw the cops, and then helpfully laid back down as if unconscious. Thanks, Blake. Looking around, I realized that I was the only member of management in the parking lot. Where had the rest gone so suddenly?

I shuffled up to the police officer and he asked, “You got a permit for this carnival?”

“A permit? Well, I uh…” I was taken aback. I hadn’t arranged the carnival. Where were the managers who had ordained Office Morale Day?

“Is that illegal gambling going on over there?”

I turned my gaze to Robert and the crowd in time to see wads of dollar bills being stuffed into pants pockets.

“Gambling? Well, I uh…” This wasn’t going well, the heat was still intense in the parking lot, my nerves were shot, and I could feel a stampede forming in the bar-b-cue below.

The officer must have seen my face pale and my forehead break out in a cold sweat. “Sir, you don’t look too well. Have you been drinking in this public venue?”

And that’s when I threw up on his shoes.

Office morale improved considerably. They say I’ll get my shoelaces and belt back after the arraignment.

Greg is the creative director of Frog God Games and author of The Slumbering Tsar Saga. You can check them out at talesofthefroggod.com. He is also a regular contributor to Paizo Publishing’s Pathfinder Adventure Paths and various and sundry other things too tawdry to mention here.

10 thoughts on “One Too Many (Voices in My Head): The Beat Down in O-Town”