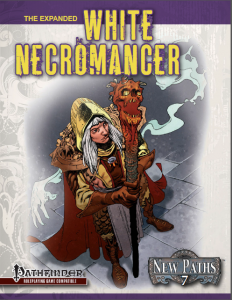 Most necromancers are foul, twisted individuals obsessed with corruption and death. But not all.

A few embrace the knowledge that true necromancy involves tapping the powers of life as well as death. These enlightened few are known as white necromancers.

New Paths 7: The Expanded White Necromancer gives you everything you need to play a necromancer whose understanding of the mysterious connection between life and death makes you a potent healer as well as a powerful spellcaster.

Designer Marc Radle has greatly expanded the white necromancer class from Kobold Quarterly #19 to include:

Hey, just because you summon ghosts and travel with a helpful vampire, it doesn’t make you a bad guy! Get The Expanded White Necromancer today at DriveThruRPG or Paizo, and wield the powers of death to bring justice and healing to the world.